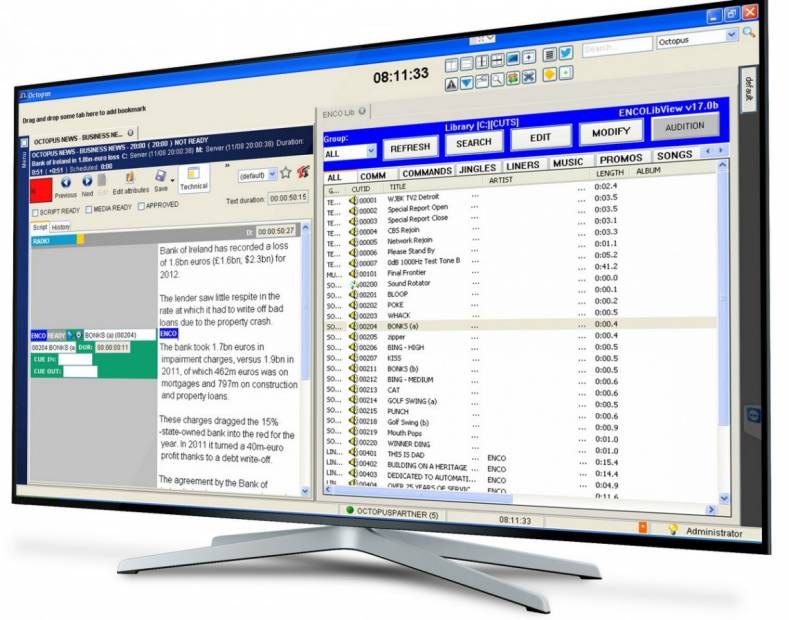 Broadcast automation specialist ENCO and newsroom computer system (NRCS) developer Octopus Newsroom are teaming up to produce more streamlined production and playout operations for news broadcasters. Practical demonstrations of this new partnership will be seen at IBC 2018 where the two companies will demonstrate their respective systems working together using the Media Object Server (MOS) protocol.

The integration of the two manufacturers' systems initially concentrated on radio, with the ENCO DAD automation and control package running in conjunction with Octopus Newsroom technology. It has now been extended into television news, using the same MOS Gateway interface to connect Octopus to ENCO's MOM (Media Operations Manager) TV platform.

By using the ENCO MOS-compliant ActiveX plug-in, journalists and production staff are able to go into the automation system's clip libraries through the Octopus client interface. By doing this they are able to browse the library, preview material, top and tail selected media and then drop and drag it into a story's running order. This method of working gives access to audio, video and graphics, which can be used as part of a story package.

Commenting on the collaboration between the two companies, Milan Varga, technology partners manager at Octopus Newsroom, said, "Other integrations we've done have often been a bit clunky initially and needed a lot of development refinements but the integration between ENCO and Octopus worked with only minor configuration adjustments. The result seamlessly bridges news production and playout to make operation easy for journalists."

Ken Frommert, president of ENCO, added, "We continue to expand our third party integrations to let customers flexibly choose exactly the right solutions for their needs. Our new partnership and integration lets existing and future Octopus radio and TV clients easily take advantage of the benefits of our automation systems."

During IBC 2018 ENCO will be exhibiting on Stand 8.A59, with Octopus on 7.A39, where it will be showing the latest version of its newsroom system, v8.2.