When an assignment contains several versions of a story, they can now all be grouped for easy overview with the new version 8.2 software.

At the 2018 IBC Show, Octopus Newsroom will unveil the latest version (8.2) of its newsroom computer software that includes a wide range of GUI refinements, usability improvements and new task-specific tools.

Version 8.2 adds the ability to use Octopus assignments for enhanced long term and short term planning. Operators can now quickly create a new theme for a defined number of stories, describe how the theme should be handled and define who will be assigned. Also new is a feature that simplifies interviewee management. Story handling is also enhanced to allow assignment-based grouping. When an assignment contains several versions of a story, they can now all be grouped for easy overview.

Adam Kennedy-Ripon, Marketing Manager at Octopus Newsroom, said that the goal is to ensure that the entire news production process is efficient and stress-free as possible.

“Octopus achieves that with eye-friendly and brain-friendly GUIs which provide the tools needed for each specific task. Additional tools can be accessed quickly when required, enabling operators to switch between roles and even to operate third-party devices. In short, we have made the best even better,” he said.

A lot of story content that could only be edited in the story editor is now editable directly from the rundown. Operators also gain the ability to create new elements, or convert or delete existing ones, directly from the rundown. Character-generated text lines can now be displayed as first and last words. Octopus V8.2 also delivers close and fast integration with Viz Mosart and Opus newsroom automation without requiring any additional plugins.

Suitable for all types and levels of operation, from a single channel with just a few bulletins per day to full-scale 24/7 news networks, Octopus newsroom software runs natively on Linux, Microsoft Windows and Apple OS X. Mobile apps are available for Google Android and Apple iOS tablets as well as smartphones. Octopus can be integrated into any MOS-compliant environment or workflow. 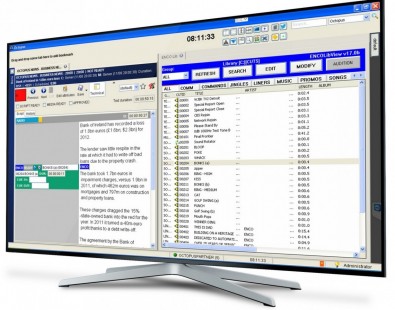 ENCO’s MOS-enabled ActiveX plugin enables journalists and news producers to access ENCO asset libraries directly within the Octopus client interface. Users can search the ENCO library, preview clips, trim media as needed, and bring the results into their stories by simply dragging and dropping the desired items. Building on the Octopus software’s ability to combine multiple media elements within each story, the integration allows journalists to easily incorporate library assets including graphics, audio and video into their scripts.

Avoiding the need for producers to manually push rundowns, running order changes in the Octopus NRCS are automatically reflected in the ENCO automation system. The Octopus software can then trigger the ENCO system via the MOS protocol to play out the assets.

The new integration will be shown in the ENCO and Octopus Newsroom exhibit stands at the IBC Show.