Fouad Zayed, an award-winning producer and director of photography, is using Litepanels, Sachtler and Anton/Bauer to capture footage of sharks in the wild for a television nature documentary series.

"While filming apex predators like sharks, any distraction underwater could cost us our lives. Plus, we cannot afford to have any gear malfunctions as some of our filming expeditions take us more than 100 miles offshore, a long way from any rental houses," Zayed said. "We stretch the limits of our equipment on a daily basis in the world's harshest environments, and we can count on these products to work every time." 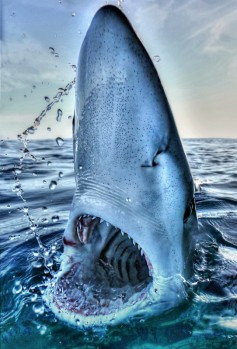 Powered by the Anton/Bauer batteries, the Litepanels Astra 1x1 LEDs can deliver up to eight hours of full-power light for the shark series, making them especially useful for lighting the boat topside for night scenes, such as when divers emerge from the water. The Sachtler tripod and fluid head are submerged in sea water and at depth, which makes them ideal for underwater shooting.

The FZ Productions team often attaches weights to a camera/tripod setup to keep it on the sea floor at depths up to 60 feet, leaving the camera rolling to capture natural footage of sharks without human interference.

"We can mount an Astra just about anywhere on the boat that we need a clean, powerful light source — just by using a Cardellini clamp," Zayed said. "And the great thing about the Anton/Bauer batteries is that they can power anything with a V-mount — cameras, lights, and other accessories — and the P-Tap power outlet means we can mount cameras on gimbals and power them without having to have the battery hanging off the camera."