IP video networks have created a new set of test and measurement challenges for broadcast engineers, especially with respect to managing network congestion.

As broadcast and production facilities move to IP-centric networks, engineers are faced with installing and maintaining new, and perhaps unfamiliar, equipment. And when the system integrator or equipment vendor leaves, it’s up to the facility engineers to keep everything operating. Welcome to the new world of IP networks.

The tutorial “IP Video Network Congestion and Stress Testing” provides a step-by-step guide to the types of test equipment needed and key quality checks engineers can make on broadcast signals to identify and correct potential problems.

This week’s second promoted article was written by former video editor Jay Ankeney. He looks inside the ACC Network, a Raycom Sports production center, which provides programming to almost 100 stations across the U.S. The sports network is available in 54% of American homes and produced content for 160 nationally syndicated football and basketball games last year.

For the recent ACC championship Raycom relied on EVS ingest servers, Maxon Cinema 4D graphics stations, all managed by an Avid workflow with 80 terabytes of storage. Learn more in the article described below. 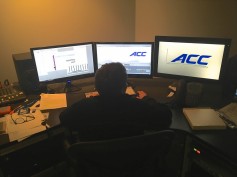 Raycom editor and coordinating producer Alex Farmartino provided an inside view of his production facility. With 10 Media Composer edit bays under his command, Farmentino’s post production crew is kept busy creating elements for Raycom’s 160 nationally syndicated football and basketball games each year in addition to a full slate of original Emmy-winning sports programming such as "Football Saturdays”, "Forging History: Road to an ACC Championship” and “A Cut Above”, which delves into New York’s ties to the ACC.

Gain tips on how you might improve you workflow from this post facility in the article, “Avid Editing at ACC Championship.”