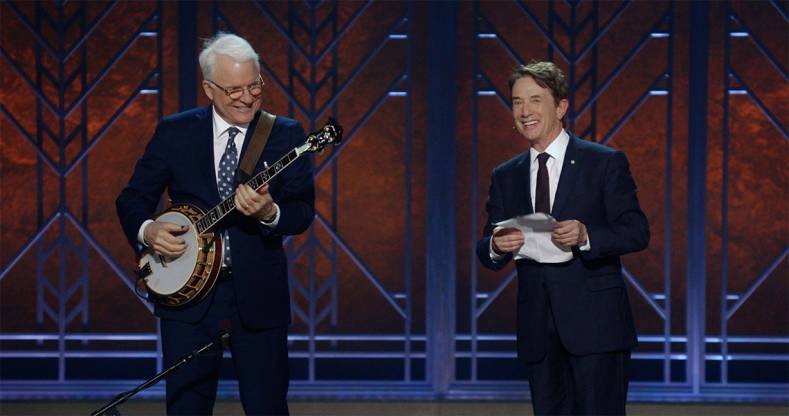 Steve Martin and Martin Short in Netflix special, An Evening You Will Forget for the Rest of Your Life.

Director of Photography (DP) Jay Lafayette selected seven VariCam 35 4K cameras and two VariCam LT 4K camcorders for the live shoot of Steve Martin and Martin Short’s Netflix special, An Evening You Will Forget for the Rest of Your Life, recorded at Greenville, SC’s Peace Center Concert Hall earlier this year. In the special, the longtime pals and comic icons share quips, musical numbers and conversations about their lives in show business. The Netflix original special begins airing Friday, May 25.

For the past two years, the Panasonic VariCam 35 has been Lafayette's camera of choice to shoot numerous Netflix comedy specials with such headliners as Dana Carvey, Tracy Morgan, Fred Armisen, Jim Jeffries, Norm Macdonald and many more. Late last year, the DP also used VariCam 35s for NBC's A Pentatonix Christmas Special, featuring the popular a capella singing group.

Lafayette's introduction to the VariCam 35 was through his colleagues at VER's Television and Cinema Division. “I was very curious about the 35's capabilities and, with several Netflix projects pending, I needed to shoot true 4K,” the DP recounted. “I loved the image right out of the box—it was much more cinematic than other 4K option.”

“Having the option of a native ISO 5000 is invaluable for these comedy specials, which are almost always shot in a live performance environment with paying audiences,” Lafayette said. “We can't make things brighter in the theatres and undermine the audiences' experience. Having such a clean image to work with at that exposure index is a game changer.”

Lafayette noted that he always hires a DIT on these live performance productions, and routinely performs a thorough first pass color grade on set. “Another incredibly useful asset of the camera is the Panasonic ROP, which enables the remote operation of each camera from a central location. This gives us full control of iris, roll, cut—every menu item—from the video village,” he said.

The DP typically uses between seven to 12 VariCam 35s to shoot a stand-up performance, and often adds one or two VariCam LT 4K camcorders for Steadicam work. His choice of lenses vary from project to project, but his go-to choices are often Fujifilm's Fujinon Premiere and Angénieux zoom lenses