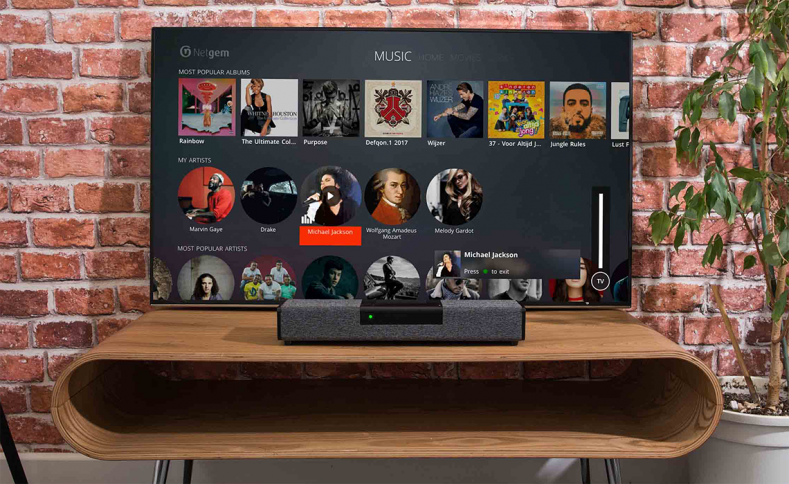 Netgem, a French provider of video distribution technology, has launched an integrated soundbar incorporating streaming and set top box functionality, kicking off with the UK consumer market via the Amazon web site.

First unveiled at IBC in September 2017 and called SoundBox HD the aim is to extend the scope of soundbars beyond audio and the living room to deliver a whole home media system capable of streaming video as well as sound via Wi-Fi to multiple devices. It also features Amazon’s Alexa voice-driven personal assistant for navigation, search and channel surfing as an alternative to the traditional remote.

The firm has stolen a march on some of its competitors giving it a small window to establish the brand in this emerging field for integrated sound bars. One major competitor Roku announced at the Consumer Electronics Show in January 2018 that it was moving into smart speakers and sound bars beyond its traditional set tops and streaming sticks through a licensing program. But the first fruits of this are unlikely to arrive until near the end of the year. Meanwhile Netgem plans to start distributing through operators in addition to the retail outlet starting around June 2018. It also plans to bring on more distributors beyond Amazon, while extending into France and Germany later in the year.

Soundbars emerged as a rather clunky fix to the problem of deteriorating audio quality associated with increasingly thin flat screen TVs with insufficient space to accommodate high fidelity reproduction. They were seen as a rather ugly but necessary adjunct to the TV by consumers wanting better audio production but unwilling to invest in a more expensive surround sound system.

But now with service integration and the prospect of Next Generation Audio (NGA) delivering object-based sound becoming supported by video services and TVs, there is growing interest among service providers. The question for devices like Netgem’s SoundBox is whether they will be squeezed in the middle between on the one hand high end soundbars such as the DALI Kubik One or Yamaha MusicCast YSP-2700 for approaching $1000 and cheaper devices or just plain TVs at the bottom. After all the Netgem SoundBox will still appear quite expensive and perhaps an unnecessary luxury to some, given that standard soundbars without the streaming and set top integration are about half the price.

It may be that such devices will gain greatest penetration through operators. They may hope that soundbars will entice younger viewers by offering a way of streaming music that would only cost a small additional premium to the basic service. The soundbar would operate like a powerful speaker controlled by remote or Alexa and then might appear to represent good value for money.

Netgem also says it has been in discussions with pay TV operators interested in the idea of the soundbar-enhanced set top to encourage consumers to step towards whole home TV while upgrading their living room TV. Rather than ditching their existing set top they would relocate it in another room, typically the kitchen or a bedroom. Under this scenario the soundbar combined with set top sits under the new TV in the living room, while the old system moves out.

Another promising use case is for “mobile first” strategies appealing to operators lacking adequate fixed line infrastructure, casting from wireless devices to the big screen via the soundbar, exploiting its streaming support.