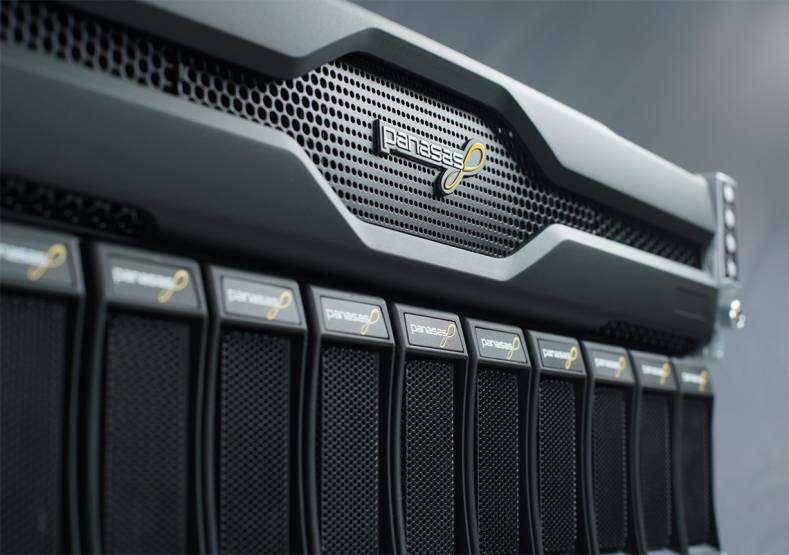 The Director Blade (ASD-100) is the brain of the Panasas storage system.

Panasas has introduced the next generation of its ActiveStor scale-out network-attached storage (NAS) solution, capable of scaling capacity to 57PB and delivering 360GB/s of bandwidth. This flexible system doubles metadata performance to cut data access time in half, scales performance and capacity independently, and seamlessly adapts to new technology advancements.

The new Panasas ActiveStor solution accelerates time to results for traditional and commercial high-performance-computing (HPC) use cases such as manufacturing, life sciences, energy, government, education and research environments, in addition to applications in media and entertainment. It uses the ASD-100, the ASH-100, an updated PanFS 7.0 parallel file system, and enhancements to the DirectFlow parallel data-access protocol to deliver these advantages.

Rack of Panasas storage. The NAS can scale out to 57PB.

Flexibility – The ability to mix and match HDD and SSD configurations under a single global namespace enables users to best match the system performance to their workload requirements.

Productivity – The new ActiveStor solution doubles productivity by cutting data access time in half, regardless of the number of users.

Investment Protection – The solution is backward and forward compatible with the ActiveStor product portfolio.

Panasas is offering a disaggregated Director Blade (ASD-100), the brain of the Panasas storage system, to provide the ultimate in flexibility. Customers can now add any number of ASD-100s to drive exactly the level of metadata performance they need. With double the raw CPU power and RAM capacity of previous Director Blades, the ASD-100 delivers double the metadata performance on metadata intensive workloads. Based on industry-standard hardware, the ASD-100 manages metadata and the global namespace; it also acts as a gateway for standard data-access protocols such as NFS and SMB. The ASD-100 uses non-volatile dual in-line memory modules (NVDIMMs) to store metadata transaction logs, and Panasas is contributing its NVDIMM driver to the FreeBSD community.

The ASH-100 is the first hardware platform to offer the highest capacity HDD (12TB) and SSD (1.9TB) in a parallel hybrid storage system. A broad range of HDD and SSD capacities can be paired as needed to meet specific workflow requirements. The ASH-100 can be configured with ASD-100s or can be delivered with integrated traditional ActiveStor Director Blades (DBs), depending on customer requirements.

The latest version of the industry’s only plug-and-play parallel file system features an updated FreeBSD operating foundation and a dynamic GUI that supports asynchronous “push” notification of system changes without user interaction.

The updated DirectFlow parallel data access protocol offers a 15 percent improvement in throughput due to enhancements to memory allocation and readahead. All ActiveStor models will benefit from this performance increase after upgrading to the new release of PanFS.