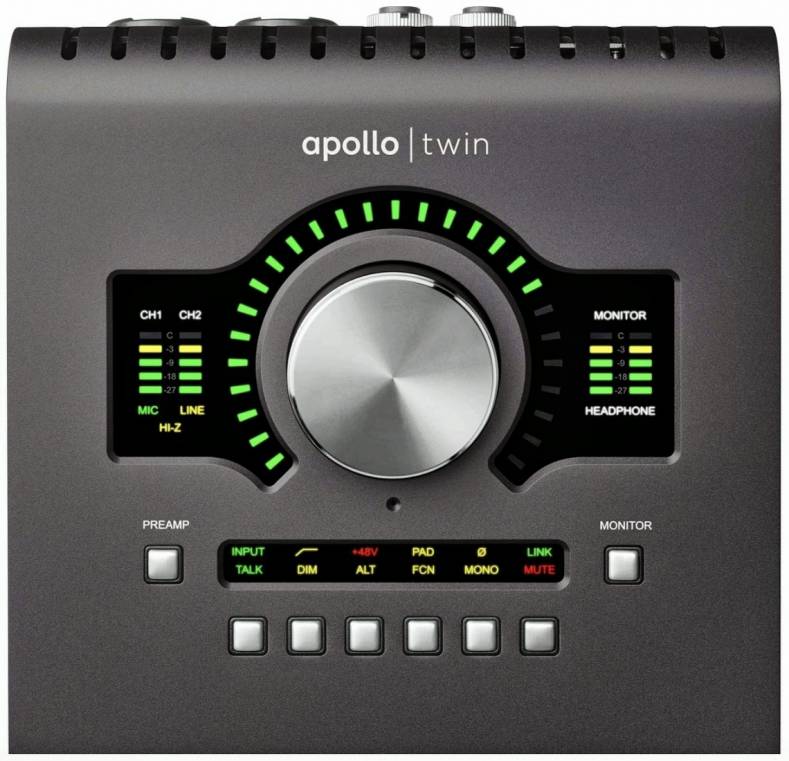 Voice-overs and narration are being produced everywhere these days. This mobility is due to top quality audio interfaces, stellar plug-ins and powerful personal computers that have transformed audio production. Now, for under $1,000, anyone can have a world class voice-over studio with classic, state of the art processing.

This technology breakthrough comes with a new generation of high-quality computer audio interfaces with a series of plug-ins that precisely emulate some of the most desired hardware processors ever made for audio. Increased computing power, coupled with Thunderbolt interfaces, offer latency-free recording with gear we dreamed of only a few years ago.

Computer interfaces are made for a wide range of audio applications. They come with and without plug-ins. For our new voice-over/podcast studio, we chose the Universal Audio Apollo Twin MkII Solo ($699). The device is primarily designed for music recording, but the combination of tools with it are also excellent for small studios doing high-quality voice work for video, film and podcasting. 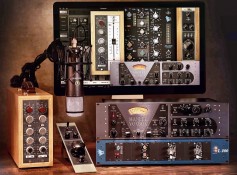 The Apollo Twin MkII Solo has two Unison-enabled mic preamps and A/D and D/A conversion derived from the company’s top of the line Apollo 8, 8p and 16 devices. With free bundled plug-ins included in the basic package, it offers the tone, feel and flow of analog recording heard on hundreds of classic recordings. For those who appreciate classic analog sound processing, this is as close as one can get without purchasing vintage hardware.

What makes the Apollo Twin so attractive are the included plug-ins for the vintage Universal Audio 610-B Microphone Preamplifier and 1176N Legacy Limiting Amplifier, Teletronix LA‑2A Leveling Amplifier and the Pultec MEQ-5 Mid-Range EQ and EQP-1A Program Equalizer. Stack these processors in the signal chain, save the configuration as a pre-set and you’ve created a perfect analog-style processing system for voice or narration.

The chain begins with the 610-B, a classic mic preamp that has the warmth of tubes. It is still made today and has been used on thousands of albums since the 1960s. Next, there’s compression. For voice-overs, you don’t want the voice to sound compressed. There should be no compression artifacts. Many end users desire no compression in voice work, while others do. It depends on who is paying the bill. 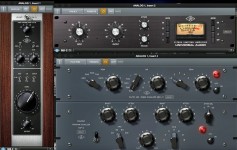 For the human voice, when compression is used, it should be very modest. Two compressors are often better than one in this situation, which is why the Universal Audio 1176N and Teletronix LA-2A work well together. Use the 1176N to eliminate big percussive, peaking moments in the voice track. It should not sound compressed, but take the edge off the peaks. Then, with the LA-2A, a much slower optical compressor, the device adds a subtle warming quality to the sound. It acts a bit like glue. Both devices complement each other.

Finally, the signal moves to the Pultec MEQ-5 Mid-Range EQ and EQP-1A Program Equalizer. The MEQ-5 adds a creamy sound to the voice, while also enhancing vocal intelligibility. The EQP-1A can boost the voice at 12kHz and cut at 5k, adding "air" to the sound without increasing presence.

Of course, equipment and settings are very subjective, and there is always room for variation and experimentation. Users of the Apollo system can choose from Neve, Manley, SSL or API plug-ins. The beauty of the Apollo device is the new Unison preamp technology captures the tone of these classic tube and solid state mic preamps, including their input impedance, gain stage “sweet spots” and the component-level circuit behaviors of the original hardware.

Beyond the included analog classics plug-ins, the Apollo devices, all the way up to quad processing models, allow users to tap into a wide range of vintage EQs, compressors, reverbs, tape machines, mic emulation, studio sound parameters and other processing. It all occurs at near-zero latency.

Though the quality of the plug-ins is an important plus in the Universal Audio infrastructure, the audio interface itself is state of the art. Recently released in its second generation, the Apollo Twin MkII series features redesigned A/D and D/A conversion, offering users increased dynamic range and low THD. This conversion improves clarity, depth and accuracy in the recording.

Due to the Apollo’s new software, users of any Thunderbolt-equipped Apollo Twin, Apollo 8, Apollo 8p and Apollo 16 audio interfaces can combine up to four Apollos and six total UAD-2 devices. So users can expand I/O and DSP as needed, as well as the amount of computing processing needed.

There are many excellent models of audio interfaces with plug-ins on the market today. Choosing the best one for a particular application is the difficult part. With plug-ins now much better and more powerful and often packaged with the interface, the economics of audio has changed. Start with a reputable brand and do careful research for the right system to fit your needs.