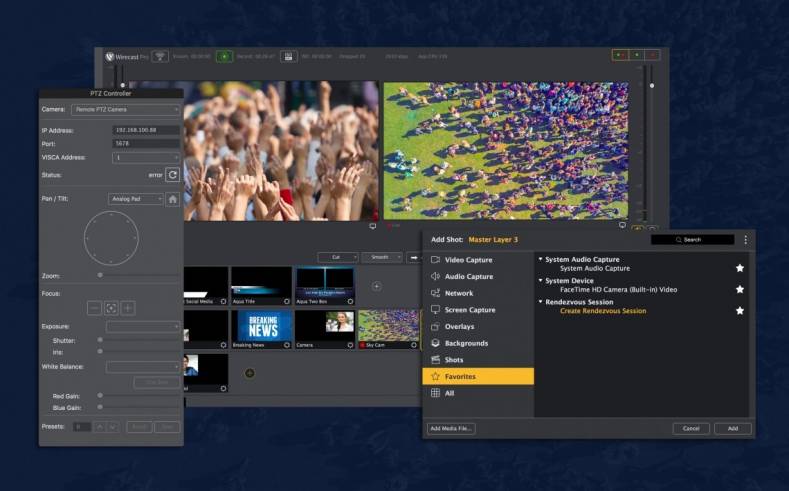 Telestream, a provider of digital media tools and workflow products, has upgraded its Wirecast live streaming and production software for Mac and Windows.

The latest release includes built-in PTZ (Pan, Tilt, Zoom) control for robotic cameras in Wirecast Pro, support for the X-Keys Wirecast Control Surface and paired encoding contribution with Facebook Live and more. The paired encoding makes it easier for videographers to target and stream content to Facebook pages for clients, customers, and their brands without requiring admin passwords or credentials for the main Facebook account. According to the company this is particularly useful for pages with multiple contributors and cross-promotional streaming.

Then the built-in PTZ control enables more sophisticated multi-camera productions without having to recruit additional staff or outside help. Optimized for the PTZ Optics camera line using the VISCA-over-IP protocol, this is more flexible and faster for generating alternative camera angles and framing from PTZ cameras without leaving the Wirecast interface.

There is also support for P.I. Engineering’s X-keys Wirecast control surface designed for rapid, responsive operation of Wirecast in faster-paced live production environments. The new Wirecast control surface offers rapid access to 12 sources on each of the five layers in Wirecast. The status of each layer and source is indicated on the controller via a light behind the corresponding key. One button triggering of saved scenes, outputs, and transitions gives operators fingertip access to the most frequently used features.

The X-keys for Wirecast Controller will come free of charge with any new purchase of a Wirecast Gear 230 system through the end of June, 2018. This is the first Wirecast upgrade since the release of version 8 which marked a change in how the software is sold and upgraded for existing customers. As of version 8, users now get frequent free updates as part of their yearly support subscription. This differs from the previous “paid upgrade” model before version 8.