ChyronHego demonstrated the advantages of moving from hardware-centric to software-centric IP production.

“Our mission here at our NAB 2018 exhibit is to show all our software production systems coming together in a real world environment,” Jesper Gawell, CMO at ChyronHego Corp., told me in the middle of the ChyronHego NAB exhibit. “That’s why we have partnered with Epic Games to integrate their Unreal Engine with our own family of augmented reality graphics and virtual set solutions to create hyper-realistic on-air virtual sets.” ChyronHego's Jesper Gawell and Jay Ankeney from The Broadcast Bridge.

That is what they had running in the middle of the lower South Hall: a complete virtual news production set harnessing ChyronHego graphics capabilities with world class gaming engines to show the future of news, sports, and weather broadcasting.

“This is an IP-based, three camera live studio set-up using our own robotics and the CAMIO Universe graphic asset management server,” Gawell said, “so people can see we have an end-to-end answer to the need for more creative studio set creation in the era of SMPTE 2110.”

Actually. ChyronHego was conducting this demonstration with two parallel types of infrastructure. The camera feeds were converted into SMPTE 2110 and sent over to enterprise grade server stacks in the nearby Cisco booth, and then run back over fibre to the central control booth. Simultaneously, an HD-SDI signal path was being utilized in the ChyronHego exhibit.

The results were broadcast throughout the 2018 NAB Show in their booth, featuring a lineup of interviews, panel discussions and special presentations as well as streaming out over their Facebook page.

“We’re doing this because we recognize that maybe not all of our customers are ready to make the jump to virtualized IT production yet,” Gawell explained, carefully enunciating the “T” of “IT”. “But we are here to show them that when they are ready for the ride, we are ready to walk hand-in-hand toward their goal.”

For Gawell, to properly understand this technological migration you need to differentiate between “IT” and “IP”. “IP, or Internet Protocol, is the packetized signal which is the most logical way to transport video around,” he said. “But IT is Internet Technology, the equipment that's ultimately far less expensive than our legacy HD-SDI gear. We need to develop the software that can utilize IT properly if we are going to maximize the advantages of IP, and this is what we are demonstrating at this exhibit in conjunction with the parallel presentation at Cisco’s booth.” 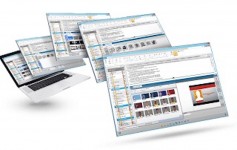 Install the LUCI website once on devices in the newsroom, and every update after that is automatically available to all users.

“We are doing that, which could also be seen during the recent Winter Olympics production,” he said. “If an additional switcher was needed, NBC did not have to buy another piece of hardware, they just installed the proper software to do the expanded job. That’s moving away from ‘captex’ (capital investment) to ‘optex’ (operational investment) which is a far more efficient utilization of your resources. You should tie your finances into projects rather than into facilities. The ability to do that is exactly what the ChyronHego exhibit here at NAB 2018 is presenting to the industry.”

Among the new products on display were CAMIO 4.4, with new features for publishing content straight from the newsroom to other social media outlets such as Facebook and Twitter.

The latest version of their graphics creation and playout system, LyricX 3.2 was seen integrating with Live Assist Panels and CAMIO.

And the latest version of the Metacast weather graphics system was shown in action within the CAMIO Universe.