NAB 2018 was full of excitement as well as traditional technology.

Whether the exhibits and technology would represent more hype than promise was a key question going into NAB 2018. Attendees expected developments on ATSC 3.0 and the industry’s migration toward IP infrastructures. Perhaps most surprising was the high level of interest in artificial intelligence (AI). Even so, some of the pronouncements about AI capabilities seemed more promise than practical.

After attending several key technical conferences and then scouring the exhibit halls for interesting technology, I came away with mixed impressions. One might have predicted all kinds of announcements about IP, 4K, 8K UHD and HDR. Sure we expected to hear a lot of activity around ATSC3.0, but I found the displays rather low-key. Sure new technologies and products were present, but what struck me more than anything else was what I see as a slowdown in vendor’s rollout of new technology solutions. Finally, a non-technical change I noticed at this year’s conference and exhibition was the number of fresh faces and changing demographics of attendees. 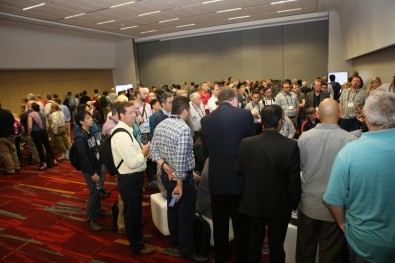 Exhibitors seldom embrace change when it comes to booth location. And the exhibits within the halls were organized somewhat differently than last year. Also there were fewer pieces and parts booths and more hardware and software interfaces and middleware. It seems that most media products now have either an application or a browser interface for setup, control and monitoring.

Industry consolidation made touring the halls an interesting adventure. With multiple mergers and acquisitions, an important question was who bought that company and where is the combined booth located? One viewpoint might be that given the recent flurry of consolidation, the end-users were keen to understand the direction of the new parent, the sustainability of their products and how to best plan when making technology decisions. 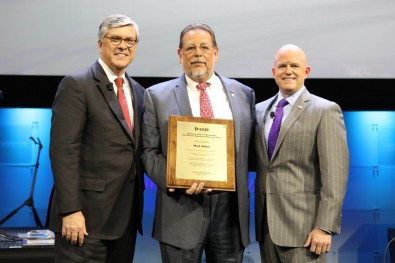 There were at least three startup islands in the North Hall, SPROCKIT, Pilot and Future. Located in the South hall, Connected IP received the red carpet treatment and was much easier to find. The IP Showcase Pavilion was located in Central Hall.

NHK hosted an 8K theatre in North Hall and there was an additional breathtaking 8K display in Central Hall. Earlier this year, Japanese network NHK announced an 8K channel is scheduled to launch in December this year.

Exhibits Had a Product Focus

There were the usual huge crowds at the larger company exhibits. Once I broke through that mass of people, the crowds were more dispersed. It seemed that companies that provided lower-cost, “solution-focused” products had plenty of visitors. 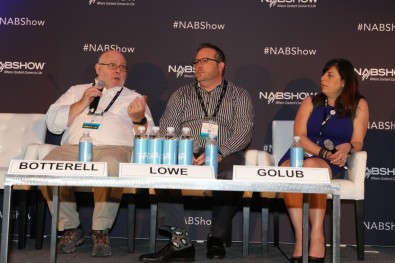 The larger and sometimes high-priced solutions often appeared to be less trafficked. Of course if you are selling hundred-thousand dollar solutions, maybe you don’t need masses, just the right customer.

I attended a pre-conference event over the weekend, which discussed the health of the broadcast and production markets. I was surprised at the amount of time presenters spent just discussing consolidation.

My opinion is that NAB 2018 had few huge announcements. The industry seems to have settled into a transitional period. SMPTE ST 2110 is now the accepted standard for uncompressed live content and many products now include ST 2110 either stock or as an option.

Given this was an Olympic year, I thought there might be some type of big related-technology announcement. Outside of 8K, not so much. One difference in this year’s Olympic coverage was its availability on multiple digital platforms, made catching your favorite event easily accessible.

To produce the event, NBC has been doing @home production since Atlanta and Olympic Host Broadcast (OBS) services produced the pool feeds. OBS recently launched the Olympic Channel so Olympic content now will be available throughout the time between the Olympic Games. The mandate for both the South Korea Winter and Japan Summer Olympics is that OBS produce everything in 8K. Even so, that does not seem to have pushed the needle towards others producing and delivering all 8K all the time. 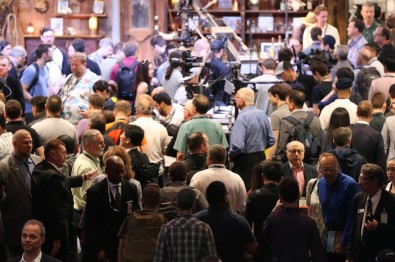 There is also no apparent rush for MIMO (Multiple-In Multiple-Out) technology. This is one of the technologies required to transport 8K. For reference, 8K requires 48Gb/s and one hour of 8K video generates about 232GB. So whether its live or by file, 8K bandwidth remains a challenge. I am thinking a Quantum Computer might be needed for any post production. Hmmmm, I wonder how many qubits an 8K production would require.

I talked with Canon’s lens and camera guru, Larry Thorpe, on 8K lensing and optics. It actually started as a chat with a colleague from Turner Sports who said he needed a lens with infinite depth of field for an 8K camera to cover the full focal range. Then Larry showed up “and that’s how the fight started”.

It was a fun conversation that I am sure the two of them have had many times before. My Turner friend commented that most camera operators only use about 10-20mm of focal range based on their position in the venue so the lensing discussion is more emotional than technical. For the fun of it, I asked Larry if he still believed that from a 10-ft viewing distance you need an 84-in screen for 4K, and if so, how large does the screen have to be for 8K. His response, “Do the math.”

I consider this a year of pause and reflection. Perhaps our industry has just endured a little too much disruption, which introduces confusion. With the transition to IP, the adoption of computer centric technologies, AI, the cloud, all replete with their unfamiliar terminology and systems, it is natural for engineers to feel anxious.

Besides, even as cloud solutions become ubiquitous, users still need bandwidth to get to and from the cloud. This key fact requires careful consideration as to which services are best suited for the cloud. Despite some vendor pronouncements, not all of today’s production and delivery tasks are well suited to cloud technology when bandwidth requirements and storage costs are factored into a plan. And, don’t forget security.

May I suggest that our broadcast and production industry needs some time for all this vendor consolidation and rapid technology change to just settle down. Customers need to feel comfortable with newly merged companies and their respective product roadmaps. Announced products must be real, not just marketing claims. Burn me once, shame on me. Burn me twice, well you get the message.

Going forward, at least for the short term, I believe media technology investments will be more focused on sustainability rather than more adventurous solutions. Change is hard, a lot of change all at the same time is really hard.