Despite all the fuss about 4K UHD television, producers of live sports and entertainment productions in the U.S. are finding that a 1080p at 59.94 fps HD signal delivered with high dynamic range (HDR) is more pleasing to the consumer’s eye. When compared to a 4K SDR picture, HD HDR images consume less bandwidth, are less expensive to produce and generally include darker blacks, brighter highlights, and richer, more vivid color. What’s not to like?

“There’s not a whole lot of interest in 4K, but there’s a lot of interest in HDR because consumers can see the difference on their TV sets,” said Bob Hudelson, FS-HDR Product Manager at AJA Video Systems. “HDR can be applied to 1080p or 720p HD productions. So, most broadcasters are looking to go 1080p HDR at 59.94 fps. [Today most broadcast in 720p/59.94 fps or 1080i/29.97.] Everyone agrees that the higher frame rate is better for sports and high motion. So if we’re going to move to something higher than 1080i, it’s going to be 1080p. It delivers the benefits of both 720p, for high frame rate, and 1080i for higher resolution.”

Variations of the HDR format are also more practical to produce, in terms of cost, because 3 Gbps routing infrastructures already found on live production trucks can be used. However, similar to the transition from HD to 4K, the path from standard dynamic range (SDR, or common HD projects) to HDR has its own challenges for content producers. The chief one is that it requires separate outputs for optimal viewing across different generations of displays. This has necessitated the need for two production trucks and related crews using special equipment that is compatible with HDR color gamuts and live HDR productions. It’s added cost and complexity that many are looking to avoid. 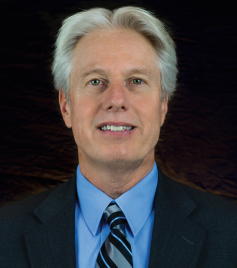 Bob Hudelson, Chief Engineer at AJA Video and one of the architects of the single master workflow concept.

Hudelson and a team of engineers at AJA Video have come up with a single master workflow concept that is based around placing the company’s latest FS-HDR conversion box at several of the most common areas of production. This means converting, in real time, SDR signals and graphics to HDR, and only requiring one truck, with one camera shader and crew to do it.

“Our goal with the new workflow is to reduce costs by getting this down to one switcher, one production format with guaranteed results that at the end we can distribute in HDR and SDR and the pictures look right,” said Hudelson. “And we don't have to master the image for each deliverable. That’s a huge advantage in a time when the industry has not yet found a successful business model for the HDR side. It’s the SDR side that makes the money.”

This dual production approach (and the extra cost), he said, is why HDR production has been slow to take off in the U.S. but production companies are beginning to test the waters more often as they see the potential. Mobile TV Group has built a 53-foot 4K HDR Double Expando mobile unit housing 14 AJA FS-HDRs for real time HDR conversion and 4K/UltraHD/HD frame synchronization as well as 12 AJA FS1-Xs and 12 AJA UDCs for HD up, down, cross-conversion and frame-synching.

“Our needs change daily, and at every location we’re working with a different set of sources, but FS-HDR makes it easy to adapt,” said Peter Wehner, Director of Engineering at MTVG. “[With the FS/HDR] we can handle nearly anything that comes into the truck and convert SDR to HDR; HDR to SDR; UHD to 720p/1080i; 720p/1080i to UHD; 720p to 1080i; and 1080i or 1080p to 720p. Not only do we get HDR and format conversion, but also get live color correction. It helps us ensure a consistent look for 4K HDR and HD SDR feeds, even when working with mixed camera sources and formats.” 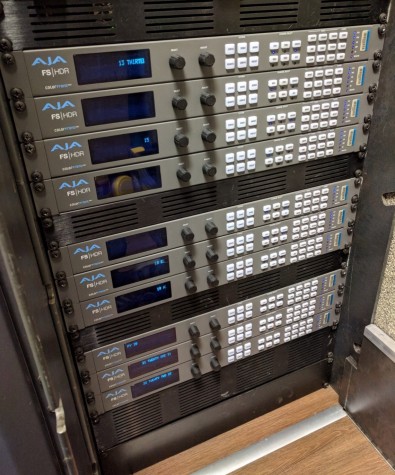 To date there have been several high-profile telecasts completed, by MTVG and others. This includes during the Winter Olympics by NBC Sports, the Rose Bowl Parade, in Pasadena, California for local broadcasters, and a live NHL hockey game shot in UHD HDR for DirecTV earlier this year. All of these projects acquired content in UHD with HDR color values.

For the DirecTV Hockey game, a Mountain Mobile SDR/HDR-capable production truck was also on hand. It featured all of the standard production equipment found onboard a live truck, but also included a dozen AJA FS-HDR units to convert things like graphics, slo-motion effects, incoming feeds to the switcher and other elements of the production chain. They also had a separate truck doing the SDR production. At certain points in the telecast, the HDR crew was receiving feeds from the SDR truck, upconverting those to UHD HDR with the FS-HDR box, and then using them in the HDR production.

“We had a DirecTV set top box and an LG 4K UHD HDR TV in the truck so we could see what the consumer was seeing,” said Hudelson, “and the pictures looked really great.”

As for the equipment, there have been a number of 4K UHD cameras and other equipment introduced by EVS, For-A Corp., Ikegami, Hitachi Kokusai, Sony and others that can simultaneously output both a standard dynamic range (SDR) and HDR signal, but they often don’t exactly match each other, which is another challenge for supporting separate SDR and HDR workflows.

That's a positive step for HDR production, but as Hudelson said, many times the two signals don't match up correctly, facilitating the need for signal conversion between SDR and the three major HDR formats used in live productions today: Perceptual Quantizer (PQ), Hybrid Log Gamma (HLG) and Sony’s S-Log 3. Users can output any of these formats with the FS-HDR. 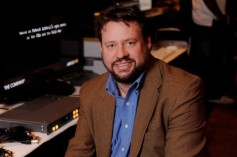 More Than Just A Frame Synchronizer

The AJA FS-HDR is a comprehensive converter box that can go from SDR to HDR or back and convert between the three HDR formats as well. It’s a frame synchronizer that also features a veritable Swiss Army knife of functionality. It’s an SDI transport device that allows users to come into the box single link 1.5G, 3G, 6G, 12G or dual link 3G, 6G or quad 1.5G, 3G. It also supports signal transfers over both copper and fiber. It’s also an up, down, cross-converter and generates metadata signaling for HDMI connections for monitoring on a consumer TV set.

“This box is a toolkit for converting SDR to HDR (all three formats),” said Bryce Button, director of product marketing at AJA Video. “It can be used to groom incoming feeds to make them HDR-compatible and match the desired production format which is essential for prepackaged items, commercials and more. It can also be used for distribution, with conversion being done at the output of the truck or back at the broadcast center before it goes out to consumers. This is a good solution if I want to deliver both HDR and SDR. And it can do that in real time.

“Graphics is a real challenge right now because there is a lot of SDR material that has already been created,” Button said. “You wouldn’t want to have to create this all again in HDR, so the FS-HDR is the answer. Being able to convert my graphics into HDR for my production switcher brings a lot of value.”

The way the FS-HDR works is that it changes how the video code values are used and what they represent. In SDR there is a range of code values that represent basically black to white, from 0-100 nits. In HDR, those code values for black to white could be 0-10,000 nits (using the PQ system). So, it’s really remapping from a 3D color gamut, color space.

“The other thing we get with HDR is that we go from the 709 color space to the 2020 color space,” said AJA’s Hudelson, “so we are able to map back and forth between these color volumes and dynamic ranges.” 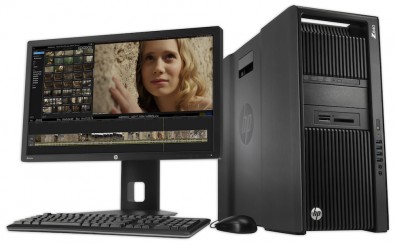 The Transkoder is based on Colorfront’s On-set Dailies architecture and uses COTS hardware to deliver faster-than-real-time processing to transcode, decode, convert, wrap and process files to various high-end file formats.

Color Science As The Secret Sauce

This color science has been developed through an AJA Video partnership with Colorfront (based in Budapest, Hungary, with offices in Santa Monica, Calif.). Colorfront offers a product called Transkoder that’s used for color grading. AJA Video has leveraged the comprehensive Colorfront Engine color transform algorithms and its well-established color science into FS-HDR. The Colorfront Engine converts incoming video back into linear light, and then maps linear light into a unique 3D perceptual space. The perceptual space has been designed to complement the Human Visual System (HVS). Mathematical transformations take place in perceptual space and produce a picture that looks correct and pleasing to the human eye.

“We could get brightness banding or colors that look a bit off with respect to each other,” said Button. “Those are the kinds of artifacts you might get when you are doing color mapping. That’s where Colorfront comes in.”

Therefore, the benefits for an SDR-to-HDR conversion are cost savings and that the production simply looks better.

“It’s going to take some convincing, because people are used to their SDR workflow and how to make the best SDR pictures,” said Hudelson. “Moving forward, with single master workflow, we’ll probably want to do our master workflow in UHD and HDR, and then convert at the end to deliver the SDR show. It’s the most cost-effective way.”

HDR Production On The Horizon

For now that is. Hudelson and Button both agree that within five years the industry will have figured out how to do a live 1080p HDR production with a single truck and crew. Also, there should be a lot of equipment that will support both SDR and HDR. Until then, converting signals at various points along the production chain will be the norm.

Thus far what production teams have found is that there are a lot of things to learn, especially in terms of shading the HDR cameras and converting the graphics for different display devices.

“It’s going to take a natural evolution to make HDR production cost-effective, but we know people are going to have to move this way,” said Hudelson. “But they need the equipment that makes it work. The production switcher has to be UHD HDR capable and cameras need to have the proper dynamic range and express that all the way to the switcher. Signal conversion using the FS-HDR is a near-term solution to this problem.”

There is no doubt that HDR and the look of a better pixel will win out with vivid imagery being the expected norm. In the meantime, the industry will evolve quickly to bring the business model in alignment with this need, and products like the FS-HDR are poised to accelerate this trend.