EDIUS 9.20 is the latest contender in the craft editing field.

With the release of their new version 9.20 of the EDIUS NLE software, Grass Valley has not only extended its HDR (High Dynamic Range) video control tools, but also given it new scopes that provide a nits display, crucial for examining the luminance values of the HDR signal.

As Atsushi Kataoka, director of product management, editing systems at Grass Valley told me during our NAB 2018 interview in the middle of the massive Grass Valley exhibit on the lower floor of the South Hall, these HDR modes include Hybrid Log-Gamma (HLG) and HDR10 Media Profile. 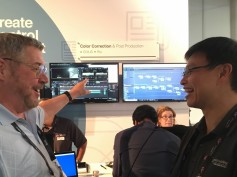 “We are also updating our support for new color spaces like the ARRI-ALEXA Wide Gamut/Log C and DJI-D-Gamut/D-Log,” Kataoka said. “With our new color space templates manager, template lists that the user creates can be exported for use with other EDIUS systems.”

Of course, a large part of the NAB 2018 news from Grass Valley is the integration of their newly-acquired post production gear from SAM (Snell Advanced Media) and Kataoka (or Alex as I’m glad he lets me call him) was enthusiastic about them being part of his equipment offerings.

“Now EDIUS can access the same material as Rio (formerly the SAM craft editor) and can import EDL’s from Go! (SAM’s browser-based mobile editor),” he told me. “This is going to give our post production line-up a great deal of flexibility.”

In addition, the company has announced a new “Floating License" model enabling the installation of EDIUS 9.20 systems onto an unlimited number of workstations within a facility.

“You can also still purchase the system outright,” he assured me, “for those who want to maintain their own NLE.”

That’s important to remember because, after all, upgrades like 9.20 are free.

The Mync Media Manager lets you create storyboards even from cell phone videos.

From my perspective as an editor, one of the most significant announcements in EDIUS 9.20 is not only that it includes the Mync Media Manger, which is capable of sorting through almost every file format—including those from cell phones—but also that Mync supports an HDR workflow including preview, storyboard editing and export.

Finally, EDIUS 9.20 can now import Apple ProRes MXF and Sony VENICE RAW files, and the processing of Canon Cinema RAW Light material of the Canon C200 has been significantly accelerated.