This year’s NAB Show attracted fewer people but a wide range of useful technology was in abundance.

Following numerous private conversations and panel discussions at the recent 2018 NAB Show, it’s become clear that broadcasters are being challenged like never before to hold the line on CapEx spending while delivering more content across their linear platforms. Because of this tricky scenario, the NAB’s annual convention was bristling with technology that helps create content easier, in a highly collaborative way, to spread the expense and manpower.

Maybe that’s why overall attendance was slightly smaller: 93,000 people came this year, compared to 103,000 in 2017. Many virtually attended from home.

Internet Protocol (IP) technology has truly burst onto the scene, now that the Society of Motion Picture & Television engineers has released the SMPTE 2022 (for sending video over an IP network) and 2110 (which puts each part of a packetized signal (audio, video and data) into a different stream. For the record: ST 2022-1/2/3/4 describes the method for sending an MPEG-2 transport stream over IP, while the ST 2022-5/6 spec provides the roadmap for sending SDI over IP. There are several versions of ST 2110 that each address different parts of the transport stream.

“Having the SMPTE standards set makes a huge difference, because now we, as manufactories, know what to build,” said Scott Puopolo, the new CEO at Telestream, which showed its new iQ platform that, according to the company, reduces total cost of ownership, controls OpEx and improves the overall consumer viewing experience. “Cloud-enabled technology is just a part of what we can deliver to our customers. We can also ensure the highest quality video gets to where it needs to go in the most cost-effective way. That’s what broadcasters want today.”

The Telestream iQ platform offers Video Intelligence Acquisition designed to measure quality metrics for each part of the video chain.

Video professionals looking for more signal density and less cabling are embracing 12 GBps technology, including sending audio, video and data over related cabling and connectors. In 2017 12G-SDI was percolating but this year it appears to be fully cooked. Indeed, 12G-SDI is the next hurdle to overcome for 4K UHD production.

“We think the industry is ready for an upgrade to 12G equipment,” said Bob McAlpine, president of Cobalt Digital, which among a number of products showed a new 4K HEVC Streaming Encoder with quad 3G-SDI and 12G-SDI inputs and a 4K 12G-SDI multiviewer with 18 auto-detect inputs. “We’re seeing customers beginning to request 12 Gbps technology for all of the benefits it brings.”

Those benefits include the ability to use a 4K camera with four 3 Gbps signals coming out that can be sent over a single 12 Gbps cable. This makes it easier to set up and carry to remote locations. That being said, at the NAB convention several companies that manufacture broadcast production cable (including Belden and Canare) showed a single strand 75 Ohm coaxial cable that supports 12G-SDI signals. Some professionals also use a fiber-optic transceiver on the back to send the signal further distances than can be accomplished with coaxial cabling.

The maturity of 12 Gbps technology was also evident in many equipment suppliers’ booths, helping to reduce cabling requirements for 4K while enabling the transfer of large capacities of audio, video and control data. From hybrid routing to fiber optic delivery, signal converters to multiviewers and nearly everything involved in the content creation and delivery chain, 12 Gbps is now widely available for those doing 4K (and 8K) production. Market players like mobile production companies looking to reduce weight and complexity as well as corporate AV presentations with large display screens are both embracing the technology.

On the show floor there was also a plethora of real-time artificial intelligence (AI) and machine learning algorithms built into a host of products and systems, including those designed to make clip searches (and addressing content restrictions for different regions of the world) faster, speech-to-text for automated closed captioning easy, machine learning more intuitive, object tracking more reliable and spatial audio recording more natural sounding. Some of these algorithms were designed in-house while many others were purchased from Google and others. 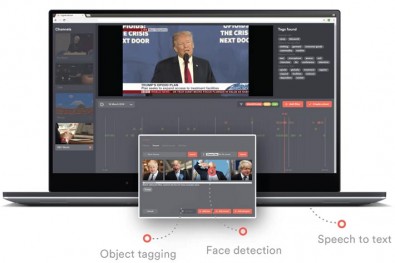 News Pilot is a fully-automated software solution based on AI algorithms that automatically switches and controls PTZ cameras, plays graphics and stored content by analyzing 3D video images and audio signals from the TV studio.

For example, a Netherlands-based company called Mobile Viewpoint has incorporated AI capabilities into a suite of products enabling broadcasters to make completely automated news productions without the need of a cameraman or director. A set of three controlled cameras, a switcher and graphics engine controlled by Mobile Viewpoint’s Virtual Director software is all that’s needed to create a vivid and accurate capture of any interview or news production.

“As the industry continues to adapt to new consumption habits and a thirst for live content grows, broadcasters must adapt to new ways of working,” said Michel Bais, CEO of Mobile Viewpoint. The company’s customers include BBC News and Sky Sports. “We are also adapting our solutions to meet those needs: artificial intelligence will bring new and exciting capabilities to the next generation of content solutions.”

The company’s News Pilot is a fully-automated software solution based on AI algorithms that automatically switches and controls PTZ cameras, plays graphics and stored content by analyzing 3D video images and audio signals from the TV studio. A second product, Automated Studio, mimics a real director, leaving the presenters to do what they are good at, which is making a live broadcast. 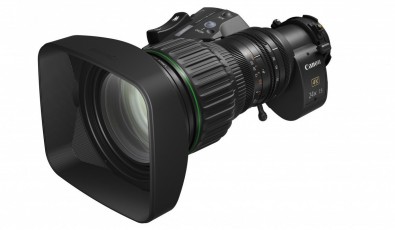 The Canon CJ24ex7.5B lens, one of two low-cost UHD models introduced at the show, offers UHD performance in a compact and lightweight design.

“Broadcasters are not ready to go there [to 4K] yet, but it still makes sense to buy the best lens you can afford,” said Larry Thorpe, senior fellow, Imaging Technologies & Communications Group, Professional Engineering & Solutions Division, at Canon U.S., “We’ve seen tests where 1080p/60 HDR looks better on screen—wider color gamut for high dynamic range acquisition—with a 4K lens versus an HD lens. It’s important to understand that a 4K lens investment today will serve you well into the future.”

Taking resolution up a notch, 8K cameras, switchers, servers and other gear were on display as well. A surprise entry was Sharp, which last showed a professional camera at an NAB convention in the 1980’s. This year the company exhibited an 8K UHD Camcorder (model 8C-B60A) with a Super 35mm-equivalent CMOS image sensor (33 million pixels) that allows operators to shoot, record, playback and distribute in 8K. The company said it is the world's first 8K UHD camera to combine these four functions into a single camera body.

The new ATSC 3.0 broadcast standard was demonstrated on board a driverless bus slowly driving around the Las Vegas Convention Center while receiving UHD signals over the air from the local Sinclair Broadcast owned Fox TV station (using an experimental license from the FCC).  An LG Electronics ATSC 3.0 television receiver and monitor on board the bus displayed a strong, uninterrupted signal being broadcast from 10 miles away.

While several stations, the most recent being in Dallas Texas, are experimenting with the ATSC 3.0 system, there does not seem to be a lot of interest from rank-and-file TV stations. Off the record, one TV engineer from Scripps broadcasting, owners of 33 stations in 24 markets, called the ATSC 3.0 standard “a pipe dream that we do not share.” 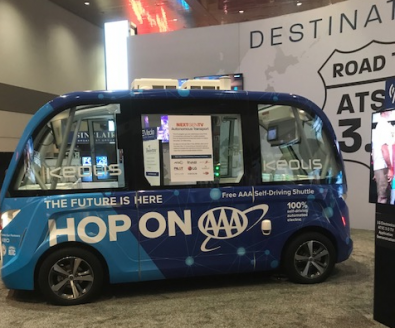 A stationary exhibit at NAB highlighted the mobile reception capabilities of ATSC 3.0, including Ultra HDTV, High Dynamic Range video, immersive audio, and personalized and addressable content. A second one self-drove around the convention center.

Walking the NAB Show floor, it was clear that augmented reality and virtual sets are taking a larger share of the market. Local newscasts now regularly feature some type of AR graphic—whether it is for news or weather—allowing the presenter to interact with 3D graphic elements on set during a live broadcast. These types of images also now dominate live sports broadcasting. What was once a complex process (requiring lots of computing power and precise camera tracking) has now been made easy by companies like ChyronHego, Ross Video and Vizrt. Look for this to continue to grow as live data feeds and other real-time analytical information is incorporated into daily news storytelling in markets large and small.

The future, at least for major multi-venue sport production, appears to be in live remote productions being done from afar. At this year’s NAB Show, several versions of "At-Home" or REMI (remote-integration model) productions were discussed as they continue to grow in popularity around the world. They save money and enable more live productions to be created using the same staffing. That staff member could be onsite or anywhere in the world with an IP connection. Companies like Avid, Broadcast Pix, Imagine Communications, Lawo, Harmonic, Riedel Communications, Sony, Wheatstone Corp, and many others now include technology in their product portfolios to make this type of remote resource-sharing model a reliable, mission-critical reality. All of the major sports networks, and small regional ones in the U.S., are doing it today.

“Broadcasters have to move to this type of shared technology model if they want to stay ahead of the game,” said Andreas Hilmer, Director of Marketing & Communications at Lawo. “They need to do more work with the same resources. We’ve been saying this for several years, but now it’s all becoming important to their survival.”

All of these new and slowly emerging technologies aside, as the cost of content rights continues to increase at the same time that in-house resources stay the same, broadcasters are looking for efficiency most of all. That won't be accomplished with higher resolution, more audio channels, or wiz-bang graphics. It’s going to take a well-planned technology strategy where all of the individual pieces fit into a larger collaborative whole. That will make everyone more capable, resourceful and competitive.