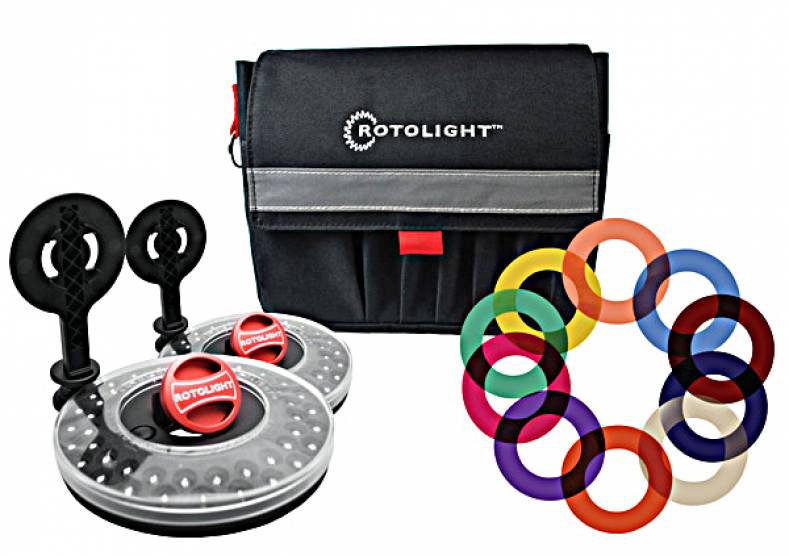 A videographer or news crew can beautifully light an interview with as little as one LED ring light.

The basic video interview is one of the most common tasks done by videographers on a typical news or documentary shoot. The staple gear for good interview lighting has long been three essential fixtures: key, fill and backlight.

In the old days when video cameras were far less sensitive, interview lighting was commonly accomplished using a basic three or four-light quartz lighting kit with a series of accessories like barndoors, scrims, gels and umbrellas. Today, in this ever-faster age of ‘run and gun’ video, the extreme sensitivity of modern cameras has forever changed the nature of traditional lighting equipment.

There are now dozens of very portable LED light fixtures that can be used for video interviews, but few work as effectively as ringlights. These circular light fixtures got their start in 1952 as flash units that surrounded the camera lens for dental photography. Then they caught on in fashion, portraiture and macro still photography and have been around ever since.

More recently, with the advent of more sensitive video cameras and LED lighting, the ringlight has developed into a portable continuous light source that has proven ideal for video interviews. In most cases, a single compact ringlight can be used as the key or fill source. 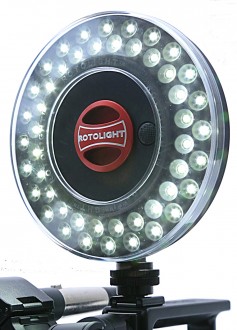 This ring light easily mounts on a camera's hot shoe

The ringlight is either attached to the camera itself (by slipping the fixture over a microphone or using the camera’s hot-shoe) or it is mounted on a stand just off to the side of the camera. Because the circle of light comes from the same plane as the camera’s lens, the illumination is virtually shadow less on the subject’s face.

Light produced from a ringlight is very soft and flattering — casting a halo over the subject and making them look younger and even glamorous. The flat, soft light hides wrinkles and blemishes. The illumination creates a circle of light in the subject’s eyes, creating an appealing catch light that adds a nice dimension to the face.

Large, professional quality ringlights have been in use for years in motion picture production. But the tiny donut-shaped LED ring light from Rotolight, based at Pinewood Studios in London, shook up the industry and brought ringlights into the portable video arena.

The Rotolight RL48-B, the company’s first product when it was founded in 2009, delivers flicker free continuous light with excellent color rendering (CRI>91). While casting flattering light on interview subjects, the entire fixture weighs only five ounces and runs for hours on three AA batteries. The hole in the center of the light can easily slip over the windscreen of a shotgun microphone for support.

Each fixture includes seven numbered gels from Lee Filters for variable color temperatures plus dimming / diffusion and minus green filters. These are stored with instructions for the correct filter to use inside the light fixture. Each basic light with a set of filters costs $129.

When the Rotolight first came out, it took the photographic, video and film worlds by storm. Now Rotolight’s credit list for the RL48 include the Tom Hanks’ feature film, Captain Philips; Skyfall, the latest James Bond film; and Hurt Locker, where it was used by BAFTA winning cinematographer Barry Aykroyd. Others using the light are the BBC Prime-Time, SKY, ITV, CNN, X Factor UK and NBC’s The Voice. 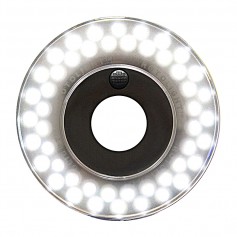 The RL48 is an 80-watt equivalent ringlight featuring a 140 degree beam angle. The bare blubs are 5500K daylight, but the filters included inside the light allow the quick changeover to other color temperatures, neutral density and diffusion. Also included in the kit is a ten piece color effects kit with filters for lightness or darkness of skin tone, backlight and hair-light effects.

Rod Gammons, chairman of Rotolight, said the circular rows of 48 LED lighting elements create “a very soft, very naturally produced light. The reflection of the light in the eye look like a reflection of the sun.

“If you see someone coming close up with a big square softbox, you see a horrible square effect that’s very unnatural in the eye. But with the LEDs you actually get something that looks like a little point light that gives a nice natural focus to the eyes. The light is very appealing and complimentary to the skin.”

A user of the Rotolight Interview Kit is British photographer Tom Lee, a veteran with more than 30 years of photographic experience. He uses the kit for video interviews, and said the two light kit is more than adequate enough for single person interviews. A pair of kits, he added, work well for larger interview set-ups.

Lee has created two diagrams of interview set-ups that he found works well with the Rotolights. One mounts the light on the camera, while the other moves it slightly off-center to a light stand.

Here, the Rotolight Interview LED light is mounted on the microphone of a small JVC camera.

“Many claims are made by manufacturers about how good their own branded equipment is, but it seldom lives up to the claims. The Rotolight Interview LED Lighting Kit is an exception,” Lee said. “I was looking for a small but portable continuous light source for my Nikon D4 video capability that could double as a supplemental head and shoulders portrait light. I found one in the Rotolight RL48.” 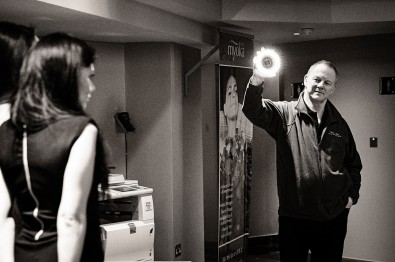 The Rotolight, Lee said, gives a truer, cleaner, more accurate quality of light than any other fixture he has used. “Some other units have a non-linear, occasionally pulsating light quality that plays havoc with video productions,” he said. “This becomes more apparent in mixed lighting conditions such as a client’s office fitted with strip lights or dimmable tungsten sources.” 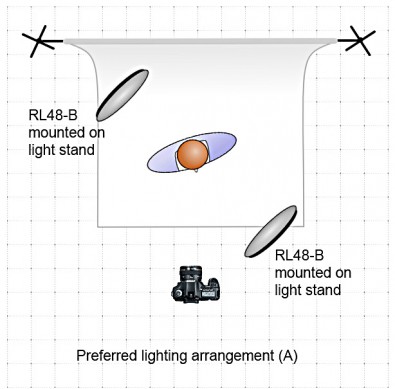 Lee's lighting Method A relies on two lights, separated by 180 degrees. The illumination can be adjusted by simply positioning the lights closer or further from the subject.

Of his two favored set-ups for interviews, Lee said he preferred Method A, which is to shoot with the two lights mounted on separate stands 180 degrees apart. “This gives good light modeling and allows me to place the units closer or further from the subject to vary the light intensity without resorting to using the ND filters,” he said.

His second set-up, which he calls Method B, is less flexible as one of the units is fixed to the camera and the quality will depend on the lens used on the camera. However, he said, both methods produce excellent results with video. 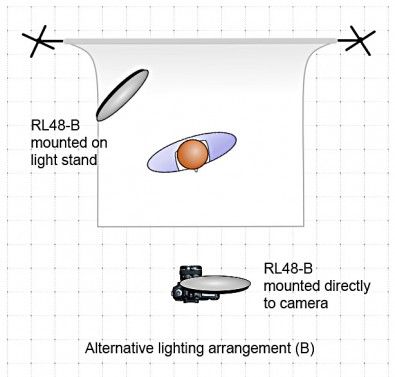 “It’s an incredibly versatile kit for very little money and will fulfill a multitude of roles where time is of the essence and quality will not be compromised,” Lee said. “It’s an essential part of my ‘away’ kit from now on.”

For all the praise, ringlights are not perfect. In certain situations they don’t work well at all. For interview subjects, who must wear glasses during the shoot, that circle of light can cause distracting round reflections in the glass. The halo effect in this case is a negative.

Rotolights are also designed to work close to the subject. A distance of three feet is the sweet spot. If you have to light a larger area, the light falls off dramatically, often requiring supplemental lighting. In such cases, the battery-operated Rotolights may not be powerful enough.

However, for close-up shoots of single interview subjects, the portability and flattering look of the ringlight is hard to beat.