The adoption of most technologies usually happens incrementally for both manufacturers and users. Audio over IP (AoIP) is a leading example of this. While some companies have been applying the technology for over ten years for a range of applications, others are only starting to move beyond third party integration. This is the case with Calrec Audio, which is using the 2018 NAB Show to launch its first fully IP mixing console after including interfaces for AoIP on its existing range of desks.

The new Calrec R-Type is, in the words of the company's director of product management, Henry Goodman, not only its first all IP mixer but also its first native AoIP product. On top of that the desk marks Calrec's return to the radio market, which it has not addressed specifically since the late 1990s with the X Series. Since then the manufacturer has concentrated on desks for TV broadcast production, aiming products such as the Apollo, Artemis and, more recently, the Summa and Brio firmly at studio and OB trucks applications

Aside from its target market, a key difference between the R-Type and its television-oriented counterparts is the networking provision. The new console does not feature Calrec proprietary Hydra2 routing and I/O system, which is integral to the TV desks. Hydra2 is being used by many leading broadcasters, including Sky and BT Sport, to interconnect several consoles in sound control rooms within a broadcast centre. By interfacing with AoIP formats, including RAVENNA and Dante, plus the AES67 interoperability standard, it is possible to link such set-ups with wider networks.

Instead of Hydra2, the R-Type is based on what is described as a "simple" 2U core, plus "integrated I/O resources". Networking is through AES67 compatible connections, which means, Goodman says, the desk can link to other Calrec consoles fitted with the necessary interface. But, he adds, the main reason for targeting the radio market with the R-Type is because it has already embraced AoIP.

"Radio is quite a way ahead of TV in terms of what it is doing with AoIP," he says. "Some of our competition is already there, including Wheatstone with WheatNet-IP and Axia with LiveWire+, so it's true to say there is an acceptance of IP in the radio market. It's easier for a start, partly because there are no pictures to deal with." 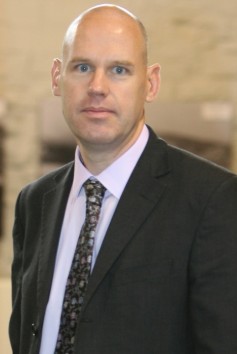 Goodman explains that Calrec has been thinking about going back into radio for a number of years and now considers the time is right due to a number of changes that have occurred in recent years. "There are several drivers in the market at the moment," he says. "Radio is, like any media platform, having to compete with streaming services for people's time. That means being more interactive with the audience, so where radio is heading is to offer more dynamic content and programming. We see opportunities in providing equipment for this new kind of operations, which are very agile and flexible in the way operators use it."

Part of this is enabling the set-up and configuration to be changed easily according to the kind of programme being produced, adapting to new style workflows. Consequently the R-Type is a modular desk that can be built up or modified according to requirements. The desk is based on COTS (commercial off-the-shelf) hardware as well as standard networking techniques, including connectivity and power over Ethernet.

Goodman comments that the work surface of the R-Type has been designed to be "customisable in a flexible way". To achieve this the control section comprises three panels: a fader module and two soft control units, one large and one small. The soft panels are touch screens that can be set up as multi-function controllers, providing specific features for each presenter while still leaving final control with the technical staff. The basic fader panel has six faders, working with a DSP engine. "It's the entry level," says Goodman. "There's enough to handle networking and you can build up by plugging in RJ45 network cables."

The Type-R also offers features specific to broadcast radio, including bussing and mix-minus, plus more standard functions such as equalisation and dynamics control. The X Series desk, which Goodman remembers was introduced around the time he joined Calrec, was a digital console at a time when that technology was still expensive and specialised. Because of this the X Series was primarily aimed at national and regional broadcasters. Goodman says the Type-R is intended to be "very competitive", going up against the Studer Glacier as well as the Axia range. He agrees that the growing trend for small-scale digital radio stations is a potential market.

The choice of AES67 for interconnectivity was, Goodman says, a very conscious one. "We've deliberately gone for that," he explains, "because it is compatible with RAVENNA and, to a lesser extent, Dante. And for that reason it is a standard that people can get on board with." While the Type-R is aimed at radio to begin with, it looks set to play an important role in Calrec's ongoing product design process. "It is a cornerstone of future IP development," Goodman concludes.