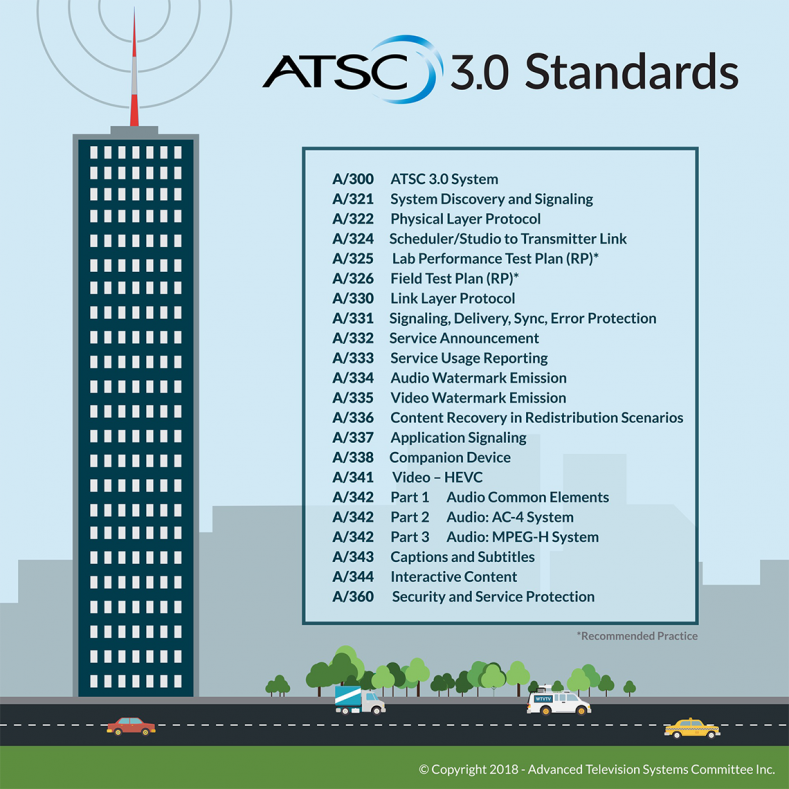 ATSC 3.0 comprises a suite of standards.

Consumers in the digital age are quick to adapt new media consumption habits as new media and methods of accessing it and interacting with it evolve. Every media technology must innovate and compete or become obsolete. For broadcast television, this challenge is practically existential. The broadcast model of one-to-many for television (and radio) dominated the second half of the 20th century. But the introduction of cable and satellite TV and the Internet enabled not only a direct one-on-one relationship between a media source and consumers but tailored personalized services and offerings that bolster “stickiness” or loyalty. 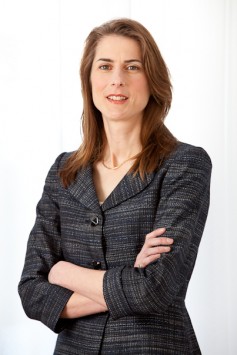 Madeleine Noland is Chair of the ATSC 3.0 Technology Group.

But changes in media, how it is accessed and consumed, and consumer behavior continued to evolve at an increasingly rapid rate.

Consumers, quick to adopt new media and ways to tap into it, have come to expect the ability to access sight-and-sound content from any source on any device, anywhere, anytime – whether that content is broadcast over-the-air, delivered via cable, satellite, phone lines or stored at home.

Digital TV was a start in this direction, but the past dozen years have witnessed technology revolutions in nearly every related field and consumer expectations have risen accordingly. Alternative delivery paths have proliferated. Receiving devices such as smartphones and tablets have proliferated. Consumers expect interactivity. Behind the scenes, major improvements have taken place in video and audio coding efficiency, while broadcast spectrum has become scarcer.

The role of standards

Invisible to consumers are the technical standards that enable solutions to broadcast TV’s challenges. Standards really provide the basis for fundamental shifts in technology because they ensure the interoperability and economies of scale that lead to innovation and market adoption. The standards for digital TV were developed beginning in the late 1980s and approved by the FCC 1996, and it took nearly a decade to move the market to widespread adoption.

As consumers came to expect access to content historically delivered by broadcast TV pretty much anytime, anywhere and device-agnostic, those involved in conceiving and writing applicable standards had to lead the way to a sustainable future. And achieving that future, meeting consumer expectations, meant that new standards had to be extensible, scalable, and adaptable to unforeseen developments.

These are the challenges that have been met by ATSC 3.0, which now has regulatory approval from the U.S. Federal Communication Commission for voluntary commercial services, clearing the way for actual trials in test markets to understand best practices for applying the ATSC 3.0 standards for the next-generation of broadcast TV and how consumers respond to new service offerings.

The process for achieving the ATSC 3.0 suite of standards that enable a future-oriented, commercially viable business model for broadcast TV and commensurate consumer benefits is similar for most technical standards. I will not bore readers of The Broadcast Bridge with the minutiae of actual standards writing and approval. (I personally find it fascinating, but it’s not everyone’s top choice.) Suffice to say that it requires years of work by hundreds of dedicated individuals from the worlds of industry, academia, consultancy, public interest and policy, as well as sponsors, to develop the underlying concepts, architectures and features and hash out the standards to support them. The process basically requires a global consensus among all participants, who bring their collective expertise to bear on every detail of myriad technologies and how best to define them for commercial use in the real world.

This process more or less culminated in 2017 with approval of the bulk of ATSC 3.0 standards and led to the March 2018 approval of commercial licenses by the FCC in specific U.S. markets that will test current best practices for applying the standards and contribute to new ones.

Launching in the ‘real world’

As you read this article, two major trials are underway in “model markets” to test ATSC 3.0 services, consumer response to the offerings and also the simultaneous delivery of ATSC 1.0 which was mandated by the FCC for stations launching ATSC 3.0 services.

In January, Sinclair Broadcast Group and its partners announced that it would broadcast ATSC 3.0 signals in Dallas, Texas. This trial is viewed as a first step toward a national service launch in some or all of Sinclair’s 100 U.S. markets. The Pearl TV Business Alliance – a coalition of broadcast groups backing ATSC 3.0 – announced its Model Market project in Phoenix, Arizona, in concert with 10 local stations there. The two trials, and others such as the joint NAB-CTA ATSC 3.0 test station in Cleveland, Ohio, will exercise different business use cases that the system enables.

These ongoing trials are providing implementers and the ATSC 3.0 community with new insights on recommended practices for implementing the standard, a variety of business and use cases and consumer response to the enhanced services and content on offer. One of our key ATSC 3.0 initiatives going forward is to maintain dialogue between our group and early implementers to improve the standards when additional clarification is needed and help see that the future for broadcast TV is as bright as we envisioned.

The ATSC 3.0 standard enables broadcasters to explore many new business models and opportunities, including the long-coveted ability to establish a one-to-one relationship with individual consumers. The creation of hybrid over-the-air (OTA) and over-the-top (OTT) content based on ATSC 3.0 standards is really the first time that broadband and broadcast have been “married,” on a common IP backbone. If new consumer-facing value propositions create “stickiness,” and a competitive advantage, we are likely to see rapid adoption of ATSC 3.0.

With the marriage of broadcast and broadband, consumers will finally realize their evolving demand for access to content from any source on any device, anywhere, all with immersive audio, high-definition video, added services (including improvements in public emergency notifications) and interactivity. In fact, it is difficult to put into words the leap in sensory richness that ATSC 3.0 will enable.

To enjoy these advancements, consumers will need a “receiving device,” and various devices and form factors are expected to come to market. It could be a new ATSC 3.0-enabled TV, a box that feeds 3.0 to your current TV or a mobile device, or perhaps even an autonomous vehicle.

In 2018, after many years of dedicated work, participants in the standards development process for ATSC 3.0 will finally see the fruits of their labors in setting a 21st Century course for the evolution of broadcast TV that will revitalize the industry and bring consumers a plethora of delightful, sensory-rich benefits.

Madeleine Noland received her Bachelor of Music from the University of Massachusetts in 1989. She began her career in the television industry in 2004 with Backchannelmedia, Inc., an interactive television technology developer.In early 2013, Noland joined LG Electronics with a focus on development of industry standards and guidelines.Noland participates in a variety of industry organizations on behalf of LG, including the IEEE Broadcast Technology Society and has served in leadership roles within the ATSC 3.0 project. She is succeeding Triveni Digital’s Dr. Rich Chernock as ATSC Technology Group Chair. Noland also chairs the Guidelines Work Group within the Ultra HD Forum and the ATSC Advanced Emergency Alert Implementation Team.

She was the 2016 recipient of the prestigious ATSC Bernard J. Lechner Award for her leadership roles related to the development of the next-generation ATSC 3.0 suite of standards.