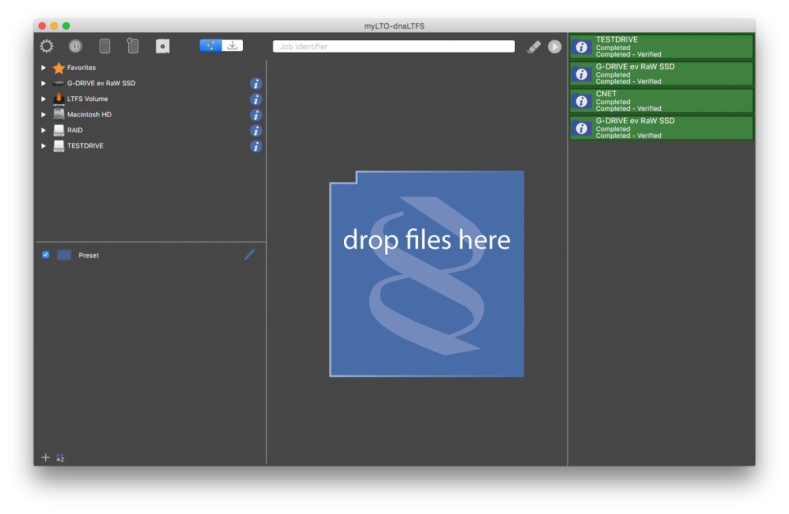 Imagine Products and StorageDNA have announced a new partnership and a resulting new product. The two companies have collaborated on an integrated solution that enables random access to files on an LTO tape, essentially turning it into a hard drive with dnaLTFS — an LTFS adaptation that was never available before. The results are time savings and easier access to assets in production and postproduction workflows.

The new joint solution is called myLTOdna, and it is an integration between Imagine Products' myLTO tape-authoring application and StorageDNA's HyperTape high performance direct access tape solution powered by dnaLTFS. The result is a simple and intuitive user interface with which to administrate HyperTape operating modes manually, or automatically from creative applications such as Imagine Products' PrimeTranscoder — a process that is highly preferable to command line operations.

myLTOdna is the Mac-based front-end interface for HyperTape. It allows users to switch modes of operation and direct HyperTape to train, write, and read to and from an LTO tape. With myLTOdna, users can now access files directly on tape without having to restore them for sequential operations such as transcoding, ingest, or QC. Instead, they can drag and drop files to or from tape at the desktop level at speeds exceeding 300 megabytes per second. Those benefits can save facilities hundreds of hours in time and resources.

myLTOdna benefits any segment of the media and entertainment industry in which ever-increasing amounts of content regularly exceed spinning-disk storage capacities. It is especially useful for field/camera file offloads, postproduction facilities receiving field/camera files, facilities wanting to manage their online storage capacity levels, and those looking to keep files long term for repurposing.

Those who use myLTOdna with PrimeTranscoder can still archive to LTO tape with standard LTFS (myLTO) and use all the functions of PrimeTranscoder: transcoding files to useable formats, stitching together clips, burning in timecode, performing color correction, and adding watermarks.