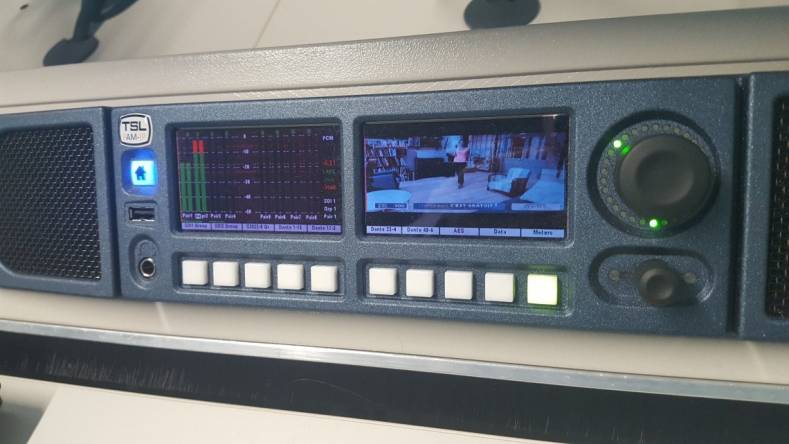 TSL Products’ PAM2-IP audio monitoring devices have been implement at BCE for use in its all IP facility at RTL City in Luxembourg.

The implementation of all-IP workflows around the world has accelerated as broadcasters realize the inherent benefits of a flexible, file-based operation and signal distribution architecture. Clear proof can be found in the variety of equipment now being sold into these new and upgraded facilities.

TSL Products, a UK-based supplier of audio signal monitoring, broadcast control systems and power management tools, is one company that develops technologies for both SDI and packet-based (IP) infrastructures. The company has seen its business for audio and video monitoring applications increase significantly, now that industry standards like SMPTE 2022-6 (describing the wrapping of professional video into IP packets for distribution) and 2110 (detailing the carriage, synchronization, and description of separate elementary essence streams over IP for real-time production, playout, and other professional media applications) have been clearly defined and adopted by the broadcast industry

The company said that it has sold more than 50 of its PAM2-IP monitoring units to distribution partners and broadcasters in the U.S., South America, EMEA and Eastern Asia. Customers include Zee TV in India, CCTV in China, where the units will be used in the master control and transmission systems at its new headquarters to cover the XXIII Olympic Winter Games, and Broadcasting Center Europe (BCE) for use in its all IP facility at RTL City in Luxembourg.

BCE is a European media services company that offers system integration and software development in the areas of television, radio, production and postproduction, telecommunication and IT. Costas Colombus, Director of Technology projects and Support at BCE, said that TSL Products’ commitment to supporting emerging IP standards, such as AES-67, SMPTE 2022-6 and SMPTE 2110, gave his team the confidence to implement the PAM2-IP unit for real-time audio monitoring.

“Additionally, knowing that we could deploy the PAM2-IP in our new all-IP infrastructure without being forced to change our operational workflows was fundamental to our purchase decision,” he said, adding that the PAM2-IP is available in 1- and 2-RU configurations and includes support for both SDI sources and 2022-6 multicast streams.

Maintaining a familiar user experience was a key requirement of the development process, according to TSL Products engineers. Making the transition from SDI to IP seamless for the operator, users can set the device to receive select 2022-6 multicast stream addresses and employ defined pre-sets to switch between multiple 2022-6 sources directly on the front panel with a simple button push. In addition, PAM2-IP units across a facility can be configured, controlled and monitored via a Web interface from a single desktop and now support the Ember+ protocol (developed by the Lawo Group and L-S-B Broadcast Technologies GmbH)—enabling engineers to integrate all Ember+ capable third party devices into their automated workflows.