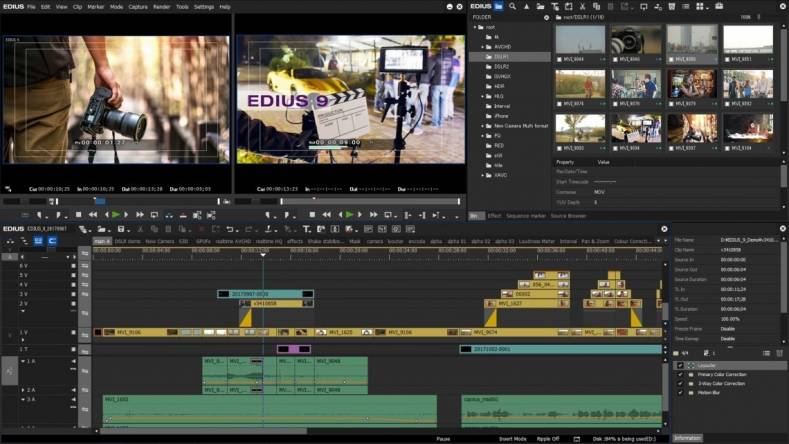 The EDIUS 9 nonlinear edit system can probably handle more different codecs than any other NLE on the market.

Grass Valley is one of the foremost providers of sports and news post production equipment around the world. And with their acquisition of SAM, their solutions are just going to get better. Here’s a snapshot of where the company’s technology is just prior to NAB 2018.

The great sportscaster Vin Scully spent 67 seasons with the Los Angeles Dodgers and he would occasionally sit next to me as we edited segments for the “Dodger Central” pre-game show during the mid-80’s. Back then, I thought my creative services edit bay at the Fox flagship station in Los Angeles was pretty state of the art. But “Forget it!” as Vin famously called when a ball soared over the outfield fence. How things have changed in sports editing since then!

When anyone talks about editing sports, Grass Valley will be one of the first names mentioned. The company is a key player when it comes to providing sports editing equipment to facilities and trucks from around the world.

Alex Lakey, the business development manager for news and asset manager for Grass Valley in Europe, was good enough to describe the current state of the GV sports editing equipment with the caveat that the whole arsenal is in a state of flux. Not only are we on the cusp of NAB with all it’s new surprises, but the recent acquisition of SAM (Snell Advanced Media) will add multiple new technologies to the mix.

So I took this opportunity to look at Grass Valley sports editing equipment as a moment in time. We’ll revisit the field of play again after the dust settles.

“To begin with," Lakey began, “our sports and news systems are designed for fast turnaround production. The K2 media server and storage platform integrates directly with our EDIUS 9 editing system and allows you to start editing even while new material is still being ingested.”

The K2 Dyno combination becomes an easy-to-learn replay system thanks to its intuitive touchscreen interface, shuttle knob and T-bar. Its unique AnySpeed technology provides playback from 0% to 200% and the DynoZoom tool gives the operator pan/zoom functions even for high frame rate cameras including 3X 1080p, 6X and 4K UHD.

One important function is the NLE’s ability to handle a wide variety of codecs. The editing platform was the first to crack editing the computationally challenging AVC-Intra in 2007 and it’s still high on the codec heap among edit systems.

“We also have a workgroup version of EDIUS that we sell along with the broadcast version, which are both now on version 9 that was introduced at last year’s IBC,” Lakey said. 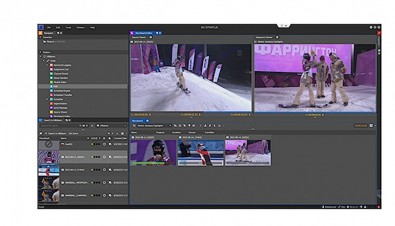 There are more than 200 GV STRATUS systems in use all over the world.

Publishing to social media is a major aspect of sports and news production these days. A key feature of STRATUS version 6 is that when a story is published to popular sites like You Tube or Facebook, a link is created between the assets in the Grass Valley systems and the social media platforms.

“The beauty of that is it allows is to periodically interrogate those sites and find out what the usage of those assets is, how many likes and shares it has, and we can then present that as statistics within STRATUS so you can see how popular your assets are,” Lakey revealed. “I don’t think anybody else can do that within a single application.”

I can’t reveal much of what Grass Valley will be showing at the NAB Show 2018, but Lakey did speak of the advent of editing video recorded on cell phones and from drones, with their oddball frame rates and resolutions.

It’s a sure bet this will just expand the company's ability to add sources to their sports and news editing capabilities. And when they add the new technologies gained from the SAM acquisition, it’s going to be exciting to see what the gurus at Grass Valley can create.