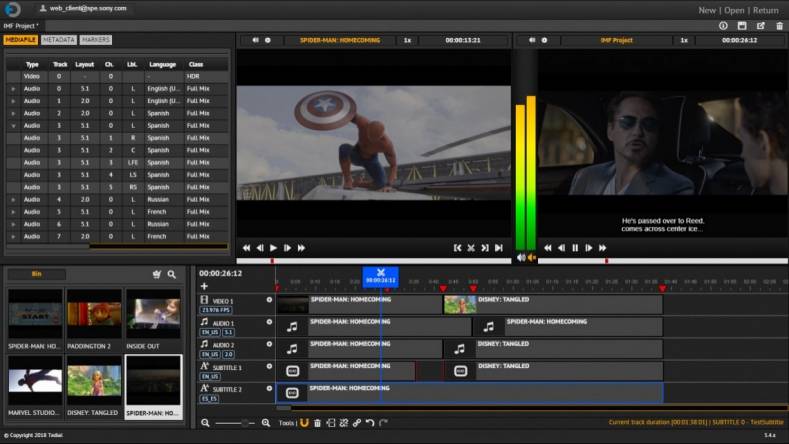 The IMF Markup Tool is integrated within Tedial’s GUI

Tedial has added to its IMF asset management software with a new IMF Markup Tool that addresses the versioning requirements typically needed for distribution.

Designed for fast validation and repair of IMF packages, this tool functions independently of “expensive” third-party systems, says Tedial, making it an “extremely cost-effective solution and easy-to operate for users.”

Explains Jérôme Wauthoz, Tedial VP Products, explains, “This tool dovetails nicely into the Just-in-Time manufacturing nature of IMF being embraced by both vendors and users within the digital supply chain. It’s really efficient since it’s native to the system and won’t require a ‘round-up’ to a third party system.”

The IMF Markup Tool is integrated within Tedial’s GUI and workflows and supports the Evolution Version Factory. It provides a near-line editor-like interface with industry-standard controls, and incorporates a feature-set that can spot-check and quality control Interoperable Master Packages (IMPs).

The IMF Markup Tool is for audio track alignment, the creation of new versions by editing on low resolution proxies, and most importantly, it can mark IMF packages to prepare them for automated sequence assembly, including insertion/localization of open credits, end credits, pre-, mid-, and post-rolls, insertion of black slugs and colour bars, etc.

“IMF markers are stored on the proxy where they can be managed by Evolution Version Factory for automated assembly distribution. In other words, the IMF marker points can be stored as ‘patterns’ to be reused repeatedly to stitch thousands of different versions through the Version Factory workflow,” explains Wauthoz.

Tedial will also highlight HYPER IMF, which is described as an end-to-end IMF MAM. HYPER IMF leverages IMF methodologies to save users up to 25% - or more - in storage, delivery and versioning costs, it is claimed.