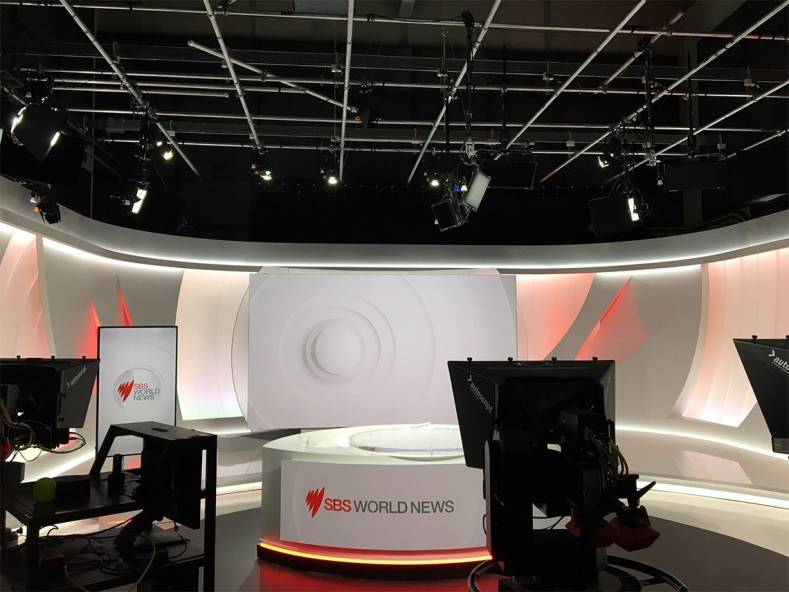 Australian broadcast network, SBS, has updated their World News channel with a new set and graphics package. As part of the revamp, the broadcaster has refreshed the look of the studio lighting, cleaned up the lighting grid and converted the studio to LED fixtures. For the lighting SBS chose an ARRI fixture package designed and supplied by ARRI’s Australian lighting distributor and systems integrator, Barbizon Australia.

For this project Barbizon was tasked with providing a full turnkey solution which included designing, supplying, installing and programing all of the lights. There were a number of challenges that needed to be overcome before the project and installation could begin with one of the main issues being a requirement to hide or remove clusters of large fluorescent fixtures and tungsten fittings, all of which previously hung in close proximity to the host desk.

The existing serial DMX512 control system was upgraded to an Ethernet-based sACN system with DMX distribution throughout the studio. The old lighting system was 36 dimmers with limited LED in the scenery whereas the new total LED fit out by its nature required multiple universes of DMX to be distributed around the studio and the lighting grid to supply data to both the fixture and the extensive LED built into the scenery.”

Using all three models of SkyPanel are used as soft sources for base, upstage kicker and fill. The matching ARRI L7-C are used for the key lights and the L5-C for backlights. Whilst the initial show commissioned was SBS World News, with the studio operating at a consistent 5500K colour temperature to match the monitors and screens built into the set, the Barbizon team and SBS production are also looking forward to exploring the possibilities of utilising the full colour gamut mixing capabilities of the ARRI L series for future shows.

Paul Lewis, Barbizon’s Systems Manager said that “Using the combination of fixtures that we have has allowed the studio to be refurbished leaving a very clean and open lighting grid making it very friendly for wide shots fulfilling one of SBS’ main requirements. LED has also by its very nature increased the reliability of the lighting system and has reduced power consumption by 80%.”