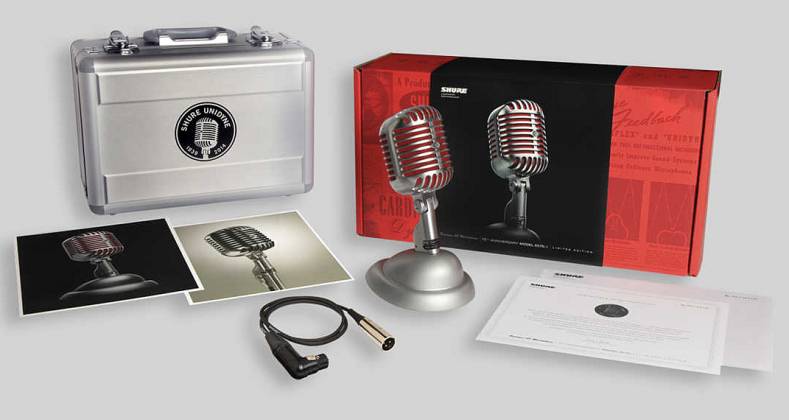 Only 5,575 of these retro-microphones were manufactured for this special promotion, so don't wait if you want one.

On the 75th anniversary of Shure’s first single-element directional microphone, the company has released a limited edition of one of the world’s most iconic microphones, the original Unidyne 55.

It's been 75 years since Shure manufactured its first single-element directional microphone, the Unidyne 55. With its vintage 1939 Art Deco “birdcage” grille and aerodynamic retro desk stand, it quickly became the "go to" workhorse for audio engineers. It's now back in a limited edition called the Shure 5575LE. The "LE" stands for "Limited Edition". If you want one, move fast. 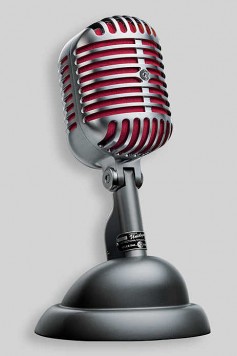 The Unidyne 55 was known both for its sound quality--and it's unique grill design.

Microphone collectors, when they see Shure’s recreation of the microphone that would go on to become the world’s longest selling professional audio product, will drool at this classic design. Only 5,575 of these microphones have been built and they are timeless works of art, much more so than the modern slimmed down 55 models in the current Shure product line.

Though this microphone represents a historic breakthrough in acoustic design, it’s the exquisite exterior that first grabs you. The microphone’s outer case was inspired by the grille of a 1937 Oldsmobile — an Art Deco choice that proves artistic “theft” is often a very good thing when it’s better than the original. 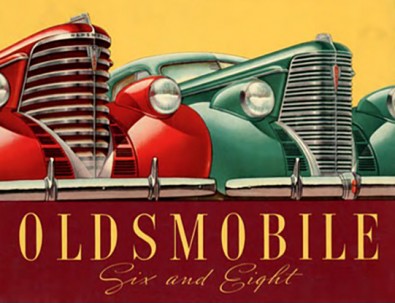 Sometimes "borrowing" an idea is better than originality. That proved to be the case with the design of the Unidyne's 55. The grill resembled a 1937 Oldsmobile. 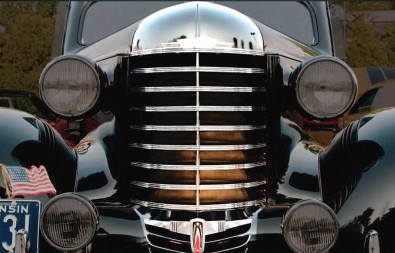 Compare the grill of this 1937 Oldsmobile with that of the Unidyne 55 microphone.

Called the Shure 5575LE (for series 55, the 75th year, limited edition model), this new/old microphone replicates the original’s 1930s design specifics with internal improvements in durability and sound quality. Priced at $399, it has just appeared at retail outlets and is expected to sell out quickly.

Everyone, including Shure’s employees, have to buy the mic at retail. Each one has a unique serial number between one and 5,575 and comes with a certificate of authenticity signed by Rose L. Shure, the company’s chairman. This reporter bought his microphone — serial number 216 — from the Guitar Center in New York City.

When opening the package, the microphone’s rich history is everywhere — from the sleeve wrapper around the box to the letters and photos on the box itself. Inside are glossy images of the microphone, a replica of the original 1939 spec sheet and the certificate of authenticity. The microphone itself, with a vintage Shure logo, comes in an aluminum flight case with the 75th anniversary branding on the outside. 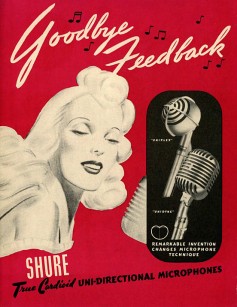 Historical Information is included with the microphone and for most owners it will represent their first look into the history of this fine microphone.

Inside the package is a Shure retro S36B desk stand in zinc die-cast with a silver finish.

The 2014 package comes complete with a replica Unidyne 55 microphone stand.

This is a splendidly designed microphone stand, straight from the Art Deco era, with a sleek, aerodynamic design. It includes a three-foot XLR microphone cable with a right-angle connector for connecting under the stand. Assembled, the microphone, with its red grille clothe, is clearly a work of art — something that seems new and quite beautiful even though you’ve seen it a thousand times.

To fully appreciate Shure’s 55 microphone, one must know its remarkable history.The major microphone manufacturers of the 1930s were RCA and Western Electric. Both had developed unidirectional pattern microphones, but these designs had to use a combination of two different elements in the same housing in order to work. This made their products not only expensive, but quite large.

Shure was just a small family operation that had begun in business in the mid-1920s selling parts for home radios. By the 1930s, it had begun to make and sell low-cost carbon and crystal microphones for public address systems.

Ben Bauer, a then 25-year-old engineer working for Shure, looked into unidirectional design. He surmised that the best way to make a really good unidirectional microphone would be to use a single element. One element would reduce the size, complexity and cost, and be far more competitive than the current dual cartridge designs.

Ben Bauer, 1945, gets much of the credit for designing Shure's first cardioid-principle microphone.

Bauer, working on a new design in the Shure lab, created a series of front and rear openings around the dynamic element that allowed sound waves to reach both sides of the element’s diaphragm. Using an acoustic principle that created a time delay between the sound entering from the rear and sound striking the front of the diaphragm, he solved the problem.

In a major acoustic breakthrough, Bauer had achieved cardioid, supercardioid or hypercardioid patterns by varying the acoustical resistance encountered at the rear openings using a single mic element. This was a stunning achievement that led to the introduction of the world’s first single-element unidirectional dynamic microphone.

Shure called Bauer’s new technology “Uniphase.” And, you guessed it, the first dynamic microphone manufactured using the technology was the Unidyne Model 55. It was, to say the least, a gigantic commercial success.

“Not only did the microphone control feedback on stage, but it allowed for the reduction of ambient noise pickup,” said Michael Petersen, a Shure executive. The Shure 55 series was also priced lower than previous directional designs. The microphones were marketed for broadcast, recording and public address applications. The Unidyne’s chrome head could be tilted up to 90 degrees, giving live performers a new freedom of movement on stage.

With the Unidyne 55 microphone, Shure began to compete effectively with RCA and Western Electric for the first time. By 1940, the company introduced its first broadcast version of the Unidyne, called the model 556. The upgraded model had tighter tolerances and a live rubber vibration isolation mount. An external call letter plate could be purchased separately as an accessory. The new microphone quickly found a home in broadcast control rooms and studios throughout the world.

For his achievement, Ben Bauer was recognized as a star in audio engineering. He went on to be appointed chief engineer at Shure in the 1940s and vice president and director of engineering in the 1950s. He later designed an impressive array of new products while at Shure.

The Shure Unidyne series microphones took the world by storm. It was used by heads of state and popular entertainers from the 1940s through the end of the 20th century. Users included President John F. Kennedy, Ella Fitzgerald, Frank Sinatra and, of course, Elvis Presley. 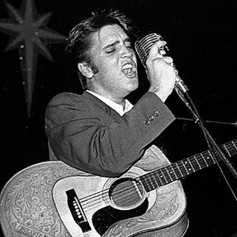 The Unidyne 55 was a hit with stage performers like Elvis Presley because it was less susceptible to feedback and reduced ambient noise.

The Model 55 Unidyne was pictured with Harry S. Truman in the famous photograph where he is holding the Chicago Tribune newspaper with the erroneous front page headline, “Dewey Defeats Truman.” It is also pictured in front of Fidel Castro on the cover of the January 19, 1959 issue of Life magazine, and in front of Martin Luther King, Jr. delivering of his “I Have a Dream” speech during the 1963 March on Washington.

Elvis Presley put the microphone on the rock and roll map, making it a symbol of American music — especially blues, R&B and rock. The 55 was so associated with Elvis’s image that it was nicknamed the “Elvis Mic.”

The 55 series microphone is still manufactured and in wide use today. The current versions, outside of the special edition, are the Shure Super 55 and 55SH Series II. On his recently completed 2014 tour, Bob Dylan used two 55s in his vocal performances and, on Broadway, Audra McDonald used a 55 for her vocal performances in her 2014 hit play, Lady Day at Emerson’s Bar and Grill.

Today, with the original patent expired, Bauer’s invention is the standard for all microphone companies in the world. It’s the basis for Shure’s extremely popular SM57 and SM58 microphones, which are Unidyne III designs. SM57s have been used on lecterns by every President of the United States since Lyndon B. Johnson.

A SM58S microphone is currently used on the International Space Station for live TV and Internet interviews with the crew. SM58s are the most popular vocal microphones for live performance music in the world today. Combined, SM57 and 58 microphones continue to be the best selling microphones on the planet.

On this 75th anniversary of Ben Bauer’s achievement and the introduction of the commemorative 55, Shure was awarded a IEEE Milestone award for the microphone technology that changed the world. The award, presented earlier this year, is highly coveted since only 137 Milestone awards have been issued.

Previous winners date back to Benjamin Franklin’s work on electricity in 1751, the transcontinental telegraph in 1861, Thomas Edison’s laboratory in 1887, the transmission and reception of radio signals in 1901 and the first satellite transmission of television in 1962. Now add to that list the work of a 25-year-old Shure microphone engineer.

All this history reverberates through the Shure 5575LE package — from Ben Bauer who designed this microphone to the people who used it to make the music and the news that changed our culture in the last century. As a souvenir, this package holds a ton of memories. It is also brilliant proof that in very rare cases art and technology can merge and work very well together.

(Shure has produced two excellent histories of Ben Bauer and the 55 microphone series. Both are free and were too large for the microphone box. They are downloadable online as shown below.

The Shure 55 Series Microphones: Setting the Standard of Excellence