Dielectric recently worked with regional partner IF Telecom to design and install main and auxiliary backup UHF systems in two cities in the state of Sao Paulo, Brazil.

Dielectric recently announced it has custom-engineered and delivered top- and side-mounted slot antennas for EPTV in Campinas and Ribeirão Preto, Brazil.

The antennas, all tuned for digital channel 25, are elliptically polarized to improve coverage in congested downtown areas as well as improving mobile reception driven by the ISDB-Tb standard. The order included a top-mounted TFU-GTH main antenna in each city, and side-mounted TFU-DSB antennas as auxiliary system backups. 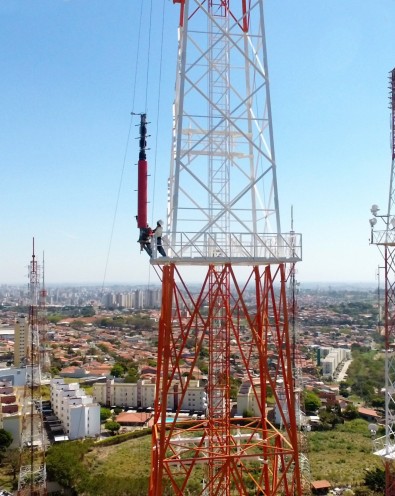 All four antennas are lightweight with low windload, and the side-mounted antennas are attached to aluminum pole structures to further reduce overall tower load. The top mount antennas are fully weather-protected with Dielectric’s special radome designs.

Dielectric worked closely with in-country partner IF Telecom, and EPTV benefited from IF Telecom’s local technical support for the installation of the Dielectric hardware.

EPTV is a Rede Globo affiliate with TV several stations serving the state of Sao Paulo. Coverage of their key stations in Campinas and Ribeirão Preto significantly improved with the new Dielectric TFU Series UHF slot antennas. EPTV reports broader coverage and positive feedback from viewers, which has positioned them in a stronger competitive position with other broadcasters in the region