Barnfind Technologies will introduce a frame that transports analog audio signals with the launch of its BarnOne BTF1-10AA at NAB. 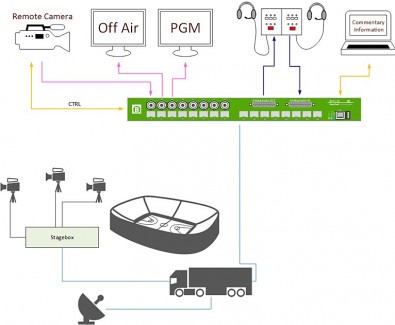 The frame is equipped with high-end AD/DA converters which convert the analog audio to MADI (AES10), enabling audio signals to be transported along with others in Barnfind’s portfolio.

MADI has been a staple in Barnfind’s signal transport spectrum from day one. BarnOne’s signal neutral crosspoint matrix, together with the SFP and BNC interfaces, converts MADI from electrical to optical and from single mode to multimode at the same time, and vice versa.

It can also distribute one MADI source to several destinations simultaneously. To complete the picture, the new BTF1-10AA frame houses an audio board with a 264x264 channel audio matrix featuring four bi-directional MADI interfaces that connect to the main matrix of the BarnOne frame, and eight balanced analog line level inputs and outputs.

The board offers audio routing on a per channel base for all four MADI streams and the eight analog ports, making the card a powerful single channel MADI-Router with analog interfaces.

In conjunction with the main matrix it can be used for MADI electrical-optical conversion or distribution. Alternatively, it can simply connect analog audio equipment directly to the MADI interfaces of an audio console or core. The interface to the console can be optical single mode or multimode fiber or electrical by coax cable (BNC).