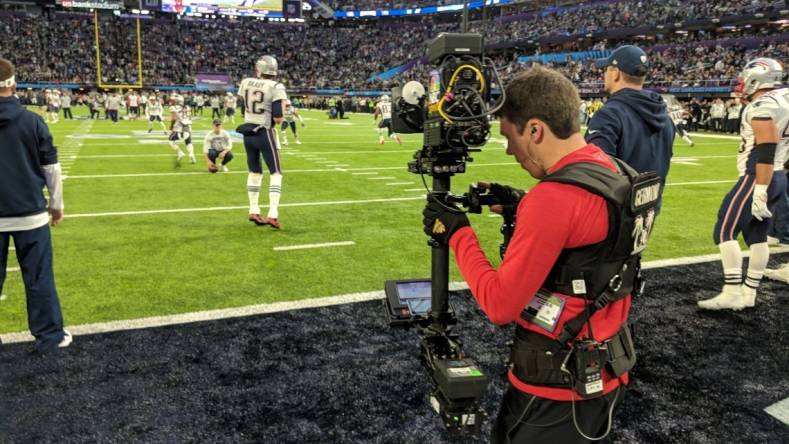 Germond "warming up" during pre-game drills at US Bank Stadium in Minneapolis.

As more than 100 million television viewers watched live, Tiffen Steadicam operator Mike Germond wound his way through a crowd of players, coaches and officials inside US Bank Stadium in Minneapolis to capture the presentation of the coveted Super Bowl LII Lombardi Trophy to the Philadelphia Eagles for their win over the New England Patriots.

In a moment like this, Germond knew there was only one chance to get it right. “This job is not for the faint-hearted,” he said, adding that he sometimes takes a bruising, just like the players on the field. “I get my workout each and every time I do a shoot of this magnitude, that’s for sure.

A veteran Steadicam operator and owner of Orlando Steadicam, a production company based in Florida, Germond has worked on films and TV sports projects, including for NBC Sports on NFL football games, horse racing (including The Kentucky Derby and the Belmont Stakes) and college football (specifically Notre Dame games). He’s also a licensed airplane pilot and certified UAV (drone) pilot, but this was his first NFL Super Bowl assignment.

Recent assignments included shooting segments for NBC Sports, including the network’s 2017 “Thursday Night” and “Sunday Night” football telecasts. That led him to the Super Bowl, where he was tasked with several responsibilities including the highly important awards ceremony, which occurred at the conclusion of the game. 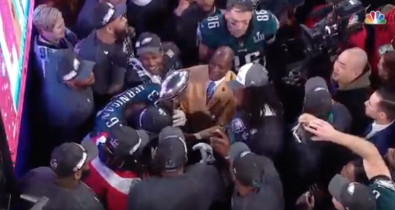 That’s Germond at the top right corner of the photo, captured live during NBC’s Super Bowl telecast as he pushed through the crowd with his Steadicam rig.

For this year’s major event he was one of eight Steadicam operators working between the six-hour pregame show, game coverage, and the halftime show. [By comparison, NBC Sports only had two Steadicam operators working the 2015 Super Bowl in Arizona.] Germond's main assignment was to capture the trophy as it came into the stadium and up onto the presentation stage where NFL Commissioner Roger Goodell handed the famous trophy to Philadelphia Eagles owner Jeffrey Lurie.

“When I’m on air, the idea is to keep that camera steady at all times, despite being pushed around and jostled from side to side,” he said. “Once the game ended there were so many people on the field that it was tough. I had to walk in front of the trophy presenter, close but not too close, through a line of players who were kissing or touching the trophy in celebration. After all my years of experience, I’ve learned a few tricks and can move my rig in certain ways to counteract what’s going on around me. This is sometimes a lot harder than it sounds.”

To this end, several other NBC cameras caught Germond live on TV as he pushed his way through the throng of people, backwards, along the red carpet as he focused on former player Darrell Green walking with the trophy and onto the main stage—always keeping a distance of about three feet away. 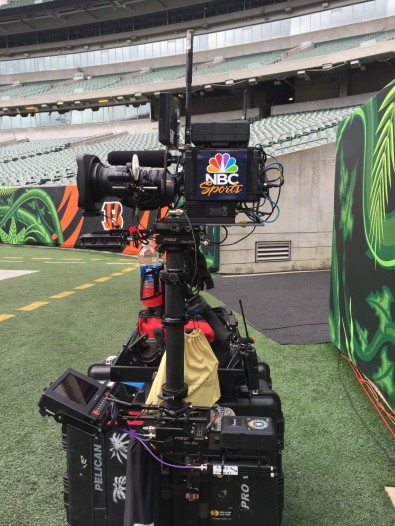 He said there were actually nine Steadicam rigs used by NBC Sports to cover this year's Super Bowl activities, with Germond being the only guy operating two separate rigs for different parts of the game.

Germond relied on a Sony HDC-P1 “box-style” HD camera mounted to his Steadicam rig, complete with a Vislink wireless transmitter and a small video monitor, all powered by a Core SWX HyperCore 98 lithium ion battery. For selected shots, he used a Sony HDC-2400 HD camera connected via a hybrid-fiber SMPTE cable to the onsite production truck. This setup was used to shoot a “clicker set” located in the stands where on-air talent provided commentary. He was also charged with capturing pre-game interviews with the wired camera inside the winning Eagles locker room.

Off to the Olympics

The day after the Super Bowl, Germond and his Steadicam kit hopped a chartered NBC Sports plane (along with about 100 other NBC Sports crew) to fly to South Korea for the Winter Olympics. There he will help NBC Sports capture the Closing Ceremonies live with this Steadicam rig.

“This is the life of a Steadicam operator, and I love it,” he said. “It’s always exciting, especially for sports events.”