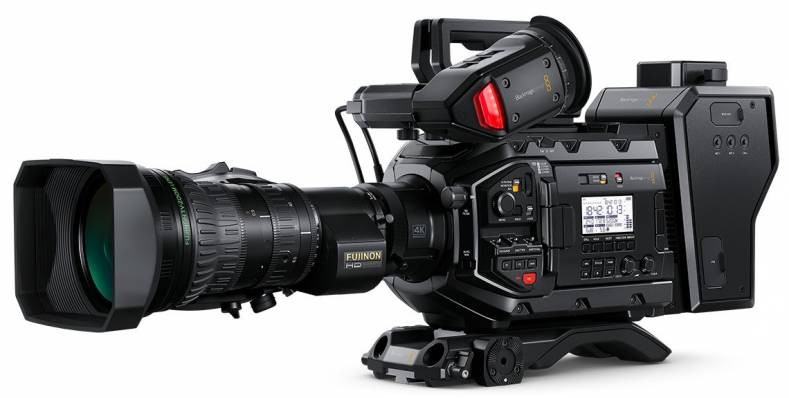 Blackmagic Design has announced the immediate availability of the latest in their Ursa camera line-up. The new Ursa Broadcast camera features a 4K sensor with a B4 mount and is designed for both field and studio operation. The camera has extended dynamic range, traditional external controls and buttons, and built in optical ND filters. Unusually for a studio camera, it has memory card slots, so can be used for location recording as well as for live operations. Released with the camera are a transmit/receive pair of SMPTE hybrid fiber electical interfaces so that the camera can use regular SMPTE 311M cables as an alternative to SDI.

The new 2/3-inch format Ursa Broadcast camera from Blackmagic Design is designed to be used for production work— as a shoulder mount camcorder—or, with the addition of an Ursa Studio Viewfinder and fiber converter, it is turned into a live studio camera.

Based on the Ursa Mini Pro, the camera has a 2/3 inch sensor and a regular B4 mount. To extend the choice of lenses the camera can be fitted with optional Ursa Mini Pro EF, PL or F mounts. The dynamic range is over 12 stops with a native ISO of 400 ISO (0dB), and integral ND filters provide great control over exposure. The UHD sensor can output UHD 2160p50, 59.94 and 60 or interlaced HD formats including 1080i50, 59.94 and 60. The HD video is down-rezzed from the UHD sensor. As with earlier Blackmagic cameras the SDI cable, along with return video, carry remote control and comms.

With a low price point, the camera opens the market for broadcast-style operation to the education, corporate communication and events markets, as well as the smaller or cash-strapped broadcaster. The camera has the flexibility to be used with ENG-style shoulder operation through to pedestal-mounted studio operation with a box zoom. The 2/3 sensor gives a wider depth of field than the cine-size sensor, a feature considered desirable for live operations.

The camera can process 3D LUTs to allow preview of different looks when used single-camera style shooting. There are three dynamic range settings for video or film appications plus an 'extended video' setting. This latter setting offers a wider dynamic range than 'video,' while applying a mild contrast change with a smooth roll off in the highlights

At the product launch, CEO Grant Petty also revealed the Atem Camera Control panel. This four-channel controller gives conventional broadcast camera control, with an iris/black joystick as well as paint and gamma controls. This is set for release May/June 2018. 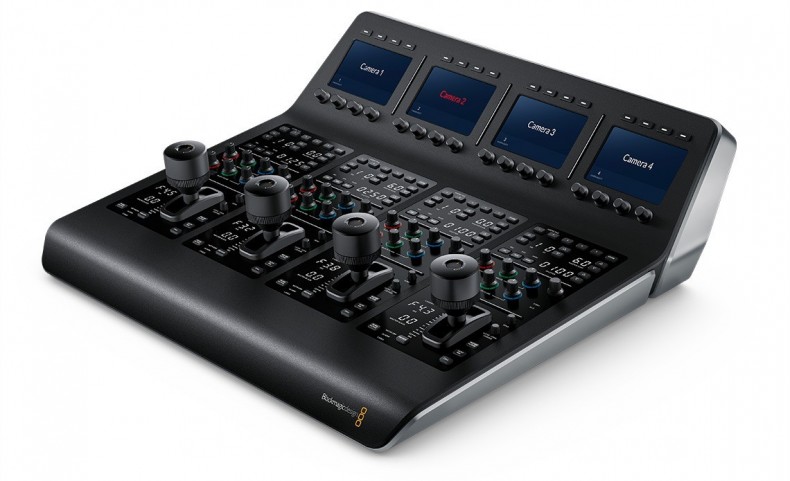 The Atem Camera Control Panel offers four channels of conventional iris and paint controls, assignable to a number of cameras.

To complement the camera Blackmagic has also released a SMPTE hybrid fiber and electrical transmit and receive pair for the many applications where the limited run of SDI cables restricts the use of a camera. With a range up to 2km, and full comms, talkback and return video, the SMPTE fibre option provides familar facilities to broadcast users. 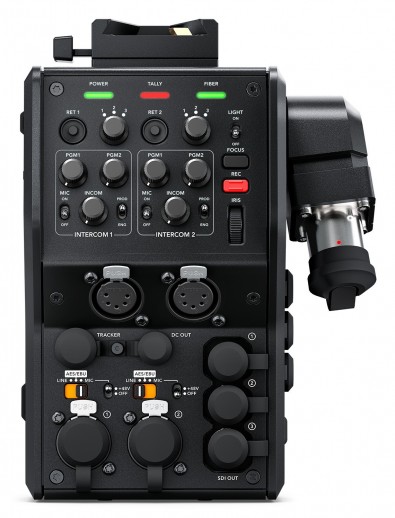 The Camera Fiber Converter present the controls to the rear of the camera in the more conventional configuration.

The cable used between the camera and studio converters is a standard SMPTE 311M hybrid electrical and fiber optic cable with a standard SMPTE 304 connector on each end. The cable features a 2 way fiber pair, data pair and power pair, along with a central strength member that gives it the needed durability for continuous use.

The Blackmagic Camera Fiber Converter attaches to the back of URSA Mini and URSA Broadcast cameras and converts all of the video and audio connections, along with camera control, PTZ, talkback, tally and power into the SMPTE hybrid electrical and fiber optic cable.

Blackmagic Ursa Broadcast puts control buttons, switches, knobs and dials on the outside of the camera, giving customers direct access to the most important camera features, mostly from the side for field operation. The Camera Fiber Converter carries a full set of controls allowing more conventional studio operation from the rear rather than the side of the camera.

Front and rear views of the rackmount Studio Fiber Converter. A number can double as a camera fiber patch panel.

The Studio Fiber Converter converts all of the signals from the camera back into standard television industry connections that can then be connected to camera control units, live production switchers, audio mixers and more. It incorporates a confidence video dispaly, useful when plugging cables and for fault-finding.