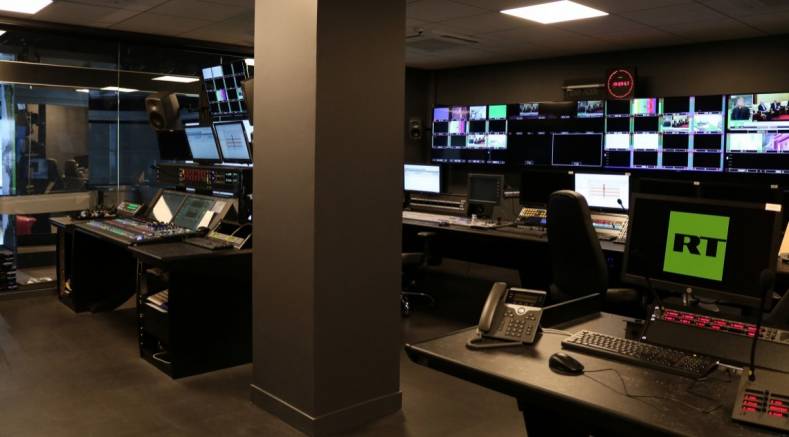 Custom Consoles desks and 5 meter wide Media Wall in MCR A at the new RT studios in Paris.

UK-based system integrator Megahertz has completed a large-scale studio operations facility for global news network RT, located in Paris, which includes the installation of several workstations and technical furniture from Custom Consoles. Delivery time was a crucial factor as this was a new build completed on schedule to go on air in December 2017.

Nigel Smith, operations manager at Megahertz, said that the Module-R series formed a foundation on which they could plan precise desk configurations needed to match each specific role; with Media Wall and MediaPost providing similar design flexibility for the various monitor screen displays. EditDesk also proved ideal for the post-production and graphics suites.

Within the production facility, MCR A is equipped with a five-seat Module-R production desk facing a 5-meter wide Media Wall. Additional desks at the rear are provided for sound director, news organizer and support engineer.

MCR B incorporates a similar production desk and Media Wall combination plus three-seat and two-seat auxiliary control desks positioned in a U formation. All six desks are equipped with supplementary equipment pods and monitor display mounts.

The audio post facility and many of the video editing suites at RT are using Custom Consoles EditDesks that were specially expanded to accommodate a ProTools control panel embedded in the work surface.

Engineering and audio control comprises three desks positioned in an L configuration. The largest of these is the chief engineer's desk, which faces two 42-inch displays on side-by-side MediaPosts. To its right is a single-bay sound engineering position. Facing the left-hand wall is a two-seat camera control Module-R desk with each operator facing a MediaPost-mounted 55 inch display screen. CCU panels are housed in two groups along the desktop.

Megahertz’s Smith said that for the audio post facility they selected a Custom Consoles EditDesk, specially expanded to accommodate a ProTools control panel embedded in the work surface. The EditDesk is fitted with two 3U-high equipment pods, which are positioned left and right of the ProTools panel. Three monitor displays on operator-adjustable arms are mounted on the left-hand pod, connected to incoming feeds and to a floor-level computer adjacent to the left-side support pillar. 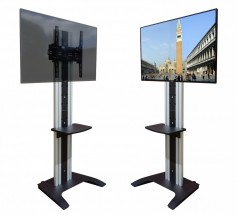 Custom Consoles’ standard EditDesks were chosen for the five edit suites, each including an 11 RU-high side pod to house a computer and auxiliary equipment. These desks are fitted with three monitor displays and two powered near-field monitor loudspeakers, all on adjustable mounting arms. There are also EditDesks for the six graphics positions, positioned in three-wide back-to-back rows. These are fitted with a desk-mounted computer monitor and loudspeakers in various combinations, the sixth position currently being a non-assigned spare.

Additionally, single-person and dual-person Custom Consoles desks with sound-absorbent work surfaces have been provided for the dubbing suites. Each of these incorporates a 6 RU equipment pod in 2 wide x 3 high configuration; plus two adjustable arms supporting a monitor display and microphone respectively.

RT is a global TV news network that broadcasts 24/7 in English, Arabic, Spanish and French from its studios in Moscow, Washington DC, London and Paris. More than 70 million people in 38 countries watch RT channels every week (35 million watch RT daily). RT is among the top five most watched international TV news channels in the U.S, with a weekly audience of more than 8 million viewers. It is also the most watched TV news network on YouTube with more than 5 billion views.