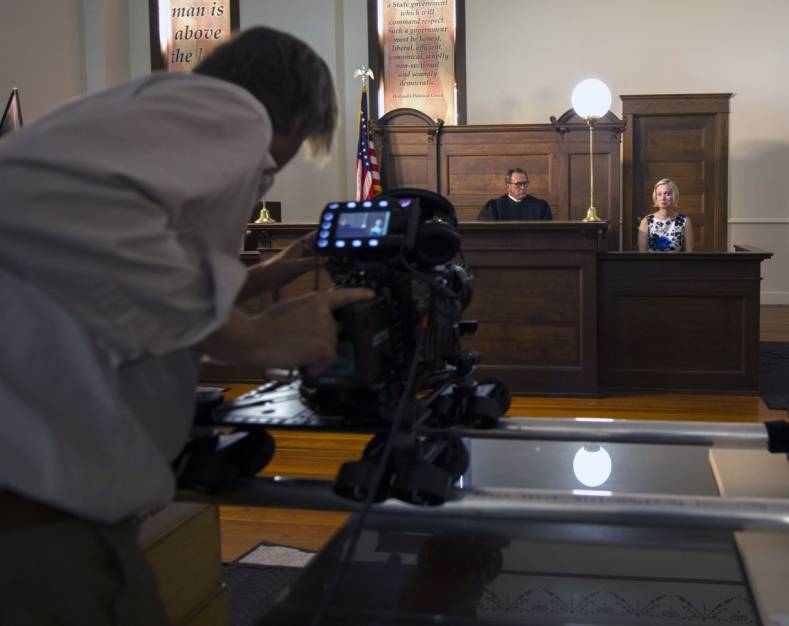 Production still from the The Groveland Four with Panasonic Varicam camera.

Nearing completion, The Groveland Four is slated for spring film festival submissions (the American Black Film Festival and AFI DOCS Film Festival), a June 28 premiere on WUCF, and then will be submitted to PBS and APT for possible national distribution. The incident it documents is that of a young Lake County farm wife, who in the summer of 1949 accused four young African-American men of rape. The case of The Groveland Four played out over several years, and led to a race riot, torture, multiple murders, two trials, a Supreme Court reversal and the assassination of a Florida civil rights leader.

Many settings in Groveland, FL and surrounding Lake County have changed very little over the past seven decades, facilitating the use of many practical nearby locations and simplifying a six-month shooting schedule that relied heavily on historic recreations. The Groveland Four's writer/director/producer is Keith Salkowski, the Director of Photography is Mark Hubatsek, Camera Operator Brian Hirten, and Editor Laurel Ladevich.

WUCF Director of Production Duilio Mariola said that the VariCam LTs were chosen after a thorough review of competitive cameras. “This represented a big investment for us, and we conducted intense hands-on trials,” he noted. “The LTs excelled in terms of image production, ergonomics and, crucially, low-light handling.”

Manager of Technology/Production Engineer Ryan Retherford recounted the shoot-out. “I shot with the LT in a dark hallway, but standing in bright sunlight in front of an open window,” he said.

“The Panasonic had much better latitude, and seemingly sought out the bright spots, seeing all the way to the back of the hallway.”

Two of WUCF's three VariCam LTs were assigned to The Groveland Four, one outfitted with Zeiss primes, the second with Fujinon 20-120mm Cabrio lenses. The 90-minute documentary was shot and is being edited in 4K.

“The production took full advantage of the VariCam LT's dual native ISOs of 800/5000,as we were shooting several of the recreations at night, some lit only with car headlights,” noted Retherford, who participated in several of the shoots. “Station management has been wowed by the camerawork, to the extent that our executive director would look at scenes and say, 'That was shot with the LT, right?'”

While production of The Groveland Four was the impetus for the VariCam LT purchase, the ultimate application for those cameras and the DVX200s is for the station's 12-person production team, responsible for shooting WUCF's roster of six local shows, Metro Center Outlook, Global Perspectives, Nerd Nite Spotlight, ONE Central Florida, Sunshine Blues and Roadtrip. While WUCF is capturing station IDs in 4K, its utility shooting format is AVC-Intra 100/1080i. The editing platform for 4K and HD is Adobe Creative Cloud.

WUCF-TV, operated by the University of Central Florida, and reaches an estimated population of 4.6 million people in its viewing area.