The goal for CBS's producers is to help music lovers get the content they want in real time across TV, social media, and digital platforms.

Sunday evening and night a team of content creators frenetically working for the Recording Academy taped IBM Watson Media’s cloud-based AI capabilities to improve their digital production workflows while creating content for the 2018 Grammy telecast on the CBS network. The software-based services helped the production teams working behind the scenes to engage viewers online at grammy.com/watson.

The goal is to help music lovers get the content they want in real time across TV, social media, and digital platforms. Thousands of pieces of data per second were processed by Watson, which then recommended and packaged highlights in the Grammy’s app and on the Grammy Awards Facebook page. The goal was to significantly improve fan engagement and revenue-generating advertising opportunities.

The solution used for the Grammy's was an on premise app running in New York City—where the Grammy Awards are based this year—that watched an existing drop folder for new Grammy’s images that could be retrieved, analyzed, and enriched using metadata.

The artificial intelligence (AI)-based workflow was powered by new data file processing and media asset management capabilities found within IBM’s Watson Media portfolio of cloud-based services. The IBM Watson Media initiative is a suite of AI-powered solutions on the IBM Cloud that can be harnessed to quickly analyze images, video, language, sentiment and tone across thousands of data files. It was officially launched at last year’s US Open tennis tournament (in August 2017). By combining IBM Watson with IBM's video capabilities, production teams working on-site for the United States Tennis Association could rapidly share highlight videos of multiple matches in order to engage online and mobile fans. The same was true for the 2018 Grammy team. 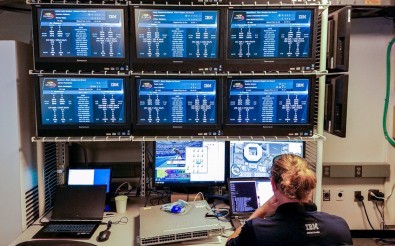 IBM’s Watson behind the scenes at the 2017 US Open in New York.

Set to be used in a similar way, the team at the Grammy Awards relied on Watson’s AI Indexed Video service, allowing video from the red carpet to be captured, categorized—tagging celebrities and topics featured during the pre-show—and immediately available to the production team within seconds.

The Watson Media service also helped process and prepare raw images from the red carpet with metadata that included name, position, facial emotion, and color dominance. This enabled online editors working for the Recording Academy and viewers at home to search and find their individual stars quickly and with a high degree of accuracy.

Using IBM’s Photo Picker and Gallery Generator, the Grammy production team can automatically build galleries of images, audio and video through a web-based tool that lets them quickly source photos based on key search criteria. This helped speed the process of editing, creating and distributing content and allowed producers to relay information and images in near real time. 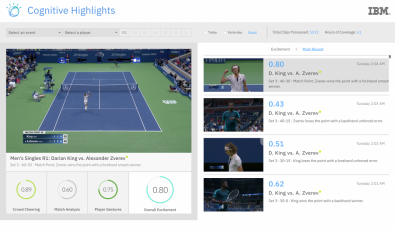 As for those fans watching online or via a mobile device, they could access live at grammy.com/watson engaging content intended to keep them hooked. A Fashion Analysis Dashboard, where individual photos are analyzed for color dominance and look, allowed fans to create a gallery of similar styles from this year and prior GRAMMY events. A Lyrical Analysis tool analyzed audio cues to generate insights on the emotional tone (Joy, Sadness, Anger, Disgust and Fear) of the lyrics of each nominated songs. This data helped create a Lyrical Analysis Dashboard where fans could visualize insights across songs, categories, and years.

For the past year IBM has been trying to attract media production professionals with its Watson Media portfolio with promises of potential time (and thus cost) savings and repurposing of existing archives (generating new revenue). Many of the demonstrations have been anchored to major live sports and entertainment television productions.