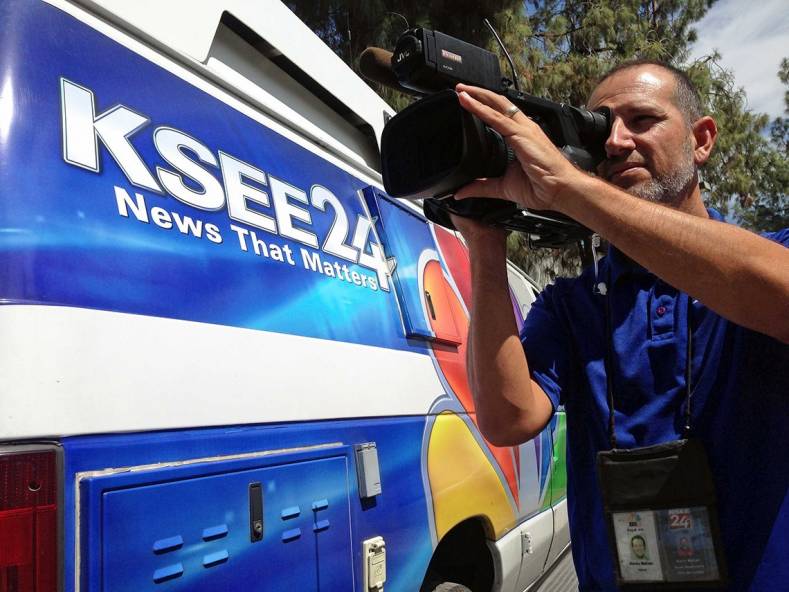 The stations share one satellite truck and five ENG trucks with microwave, but the GY-HM650s have provided a safety net in case of failure.

NBC affiliate KSEE and CBS affiliate KGPE, which serve the Fresno-Visalia, Calif., market (DMA #55), are using 15 JVC GY-HM650 ProHD mobile news cameras paired with mobile hotspots to provide live HD reports from the field during newscasts. Hector Bordens, chief engineer for KSEE and KGPE, said the stations have been using the GY-HM650s for almost a year, but began using the live streaming capabilities in February.

“Anytime you’re covering a story, you’ve got a camera with you. We’re ready to go live wherever the cameras are,” explained Chad McCollum, KSEE/KGPE news director. “You’re able to take these impromptu moments that are happening around us and transmit them to our viewers. This has really been a game changer.”  Both stations share one pool of photographers and equipment, but offer competing morning and evening newscasts. Based in Fresno, the KSEE/KGPE duopoly is owned by Nexstar Broadcasting, which owns, operates, programs or provides sales and other services to 74 U.S. television stations and 19 related digital multicast signals in 44 markets. McCollum said Nexstar’s acquisition of KGPE in 2012 and KSEE in 2013 allowed both stations to upgrade to full HD production.

Part of the HD transition was the purchase of new JVC cameras to replace an aging fleet of Panasonic ENG cameras. Bordens welcomed the use of non-proprietary SDHC recording media compared to proprietary P2 cards. “It’s made it a lot easier for our photographers to manage,” he noted. “And the cost savings – there’s no comparison.”

While the cameras were met initially with some skepticism – news photographers traditionally prefer bigger cameras, according to McCollum – the GY-HM650s were quickly accepted in the field. The GY-HM650s have also been a boon to the multimedia journalists (MMJs) employed by both stations, because the camera is lightweight and easy for non-technical staff to operate. “Our photographers really like the camera,” he said. “The lens is fantastic and it’s got the bells and whistles they expect.”

The stations share one satellite truck and five ENG trucks with microwave, but the GY-HM650s have provided a “safety net” in case of failure. McCollum said photographers in the field have already used the JVC cameras multiple times when there was a transmission issue with an ENG truck. “You cannot tell the difference,” Bordens added. “It looks that good.”

Beyond regular assignments, the JVC cameras have helped the stations deliver live stories when the competition could not. Recently, local news stations showed up for a press conference that was supposed to be held on the ground floor of a building. When officials moved the press conference to a space on a higher floor, however, only KSEE and KGPE were able to deliver live coverage.

“You can’t easily string cable up several floors to go live,” McCollum said. “We were able to transmit that video back to the station. While everyone was scrambling to cover the story, we were ready to go.”

The stations also went live from the floor of a high school basketball tournament at Fresno State University. It would have been a risky shot with a wired camera due to tripping concerns and potential cable damage, as spectators filled the court following the tournament. With the GY-HM650, however, McCollum said there were no issues and the footage looked “as clean as any live shot you’ve ever seen.”

Each station has a Teradek decoder, which can be routed for use by either station during a newscast. Bordens said the stations are also testing a JVC BR-800 ProHD Broadcaster server powered by Zixi, which manages and routes live HD streams from the JVC cameras to create a highly reliable single modem streaming system.“From top to bottom we are thrilled with these cameras,” said McCollum. “This is the technology you want on your side. From the picture quality to the ease of operation to the ability to stream live video, it’s a tool that has become invaluable to our news crews and to our news operations.”