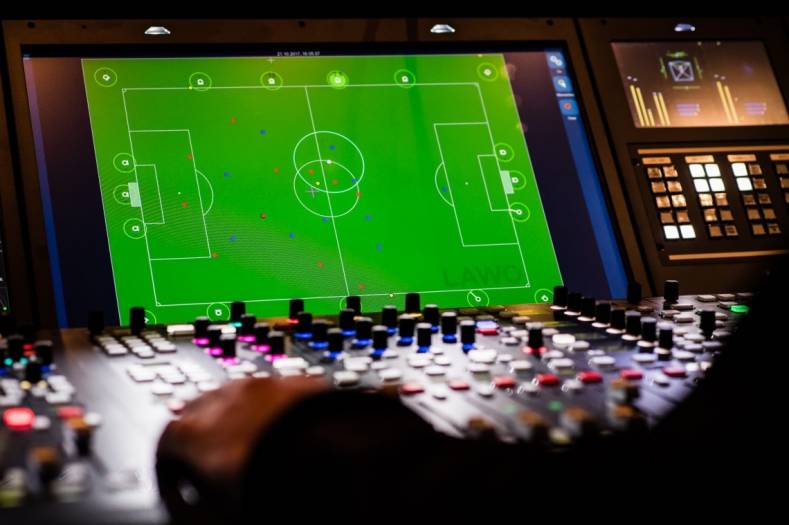 Automated closeball-mixing creates an entirely new and realistic audio experience for the viewer.

Players grunting, managers barking out directions and referees making controversial calls are all part of the live viewing telecast of a Bundesliga match. Viewers now have the ability to hear these and other captivating sounds of a match more clearly than ever before, thanks to a new automated mixing system developed by the product engineers at Lawo. It’s an automated closeball-mixing concept that replaces a human mixer with special software that provides more consistent results and better accuracy in capturing the audio action.

A company called Sportcast, which produces all 306 Bundesliga and Bundesliga 2 soccer (football) matches, has launched a new audio production system that uses live tracking data on the players to set the correct input levels for the microphones to record what is going on in the field. This creates an entirely new and realistic audio experience for the viewer. The innovative system, based on Lawo’s KICK automated mixing software, is closely tied to a graphics and match data processing platform from ChyronHego.

The KICK software serves as the interface between the tracking data received and the digital mixing consoles used on site inside an OB van. ChyronHego, which is responsible for generating the official Bundesliga match data, provides the necessary tracking data for the automated system. It relieves some of the pressure on the audio mixer, who has to follow players around and mix on the fly during a 90-minute match.

Using the existing microphones, their positions on the edge of the field and their directional characteristics, the system determines which microphone can best capture what is happening on the field at any given time and automatically sends the necessary commands to the mixing console. The sound engineer sitting in the broadcast van can use the automated mixing of the field microphones in the overall mix and thus has more leeway for enhancing the aesthetics of the broadcast sound during the match.

“We saw great potential to increase the quality of the Bundesliga’s audio experience, if we would be able to reorganize the workload of our audio engineers,” said Tim Achberger, Head of Innovation & Technology Management at Sportcast GmbH. “They should not any longer spend their cognitive resources to follow the game for the ‘closeball’ mix, but instead be fully focused on the creation of the best natural stadium soundscape.”

[A closeball mix refers to the mixing of mic levels from sources located on and around the field of play.] 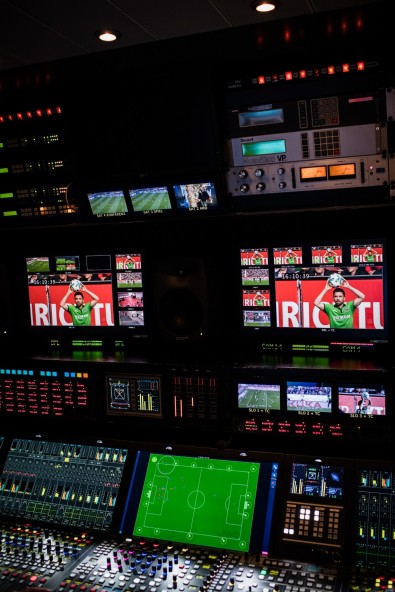 Bundesliga TV viewers are able to enjoy this new sound experience by leveraging live tracking data being ingested directly from the players. This data is used to set the correct input levels for the microphones used to record what is going on in the field. This, Achberger said, creates an entirely new and realistic audio experience for the viewer.

Sportcast, a subsidiary of DFL, coordinated the activities of the two service providers Lawo and ChyronHego and helped to ready the technology for the market in a two-year development and testing phase. That automated closeball mixing experiment is now fully under way as a proof of concept for automated mixing without a human mixer.

“The start of the Bundesliga 2017/2018 season marks a milestone in the quality of sport productions,” says Philipp Lawo, CEO of Lawo AG. “[DFL and Sportcast] have assisted us in developing the system from the seed idea right through to the final product and given us the opportunity of testing the system under real production conditions. The result of this partnership is a new ground-breaking product that will redefine workflows in sports productions.”

“The use of tracking data gives us the ability to bring the viewer as close as possible to the pitch,” Achberger said. “The automated system is much faster and more precise than a manual mix for a period of 90 minutes, even with our experienced audio engineers. The new audio production system is a perfect assistant for the engineer and will ‘open’ the most suitable microphone at any point of time to cover the sound from the pitch. On the other hand, the audio engineer has more time and resources to concentrate on the overall stadium mix including atmosphere, fans, etc.”

Lawo’s KICK is available as a software-only solution, for productions using Lawo mc² consoles, as well as a hardware bundle called the mc² Micro Core (pictured) for those using other manufacturers’ audio mixers.

The quality of the official match data required for the technology is monitored by Sportcast subsidiary Sportec Solutions, to ensure problem-free operations. The company was established in 2016 with the purpose of offering innovative sports technology data and solutions related to Bundesliga. It has been involved in all Bundesliga and Bundesliga 2 matches since the beginning of this season.

He said the system offers considerably better and more consistent quality than manual audio mixing. The Lawo KICK software uses tracking data that is now commonly used in professional soccer for displaying match statistics and analytical graphics. The on-site cameras generate the real-time data from the stadium, allowing the exact position of the 22 players, referees and the ball to be tracked.

Achberger said that the biggest challenge to deploying this kind of technology is to find and orchestrate the right partners at your side, so that all involved parties are anxious to achieve the best product possible. ChyronHego and Lawo proved to be those ideal partners.

“Furthermore it needs time and operational experience to integrate such a new technology into a serial live production of a premium product like Bundesliga, which is already produced in a top standard,” he said.

“With the unique live concept of automated closeball mixing, we brought together the best of both worlds: Impressions from the high quality microphones positioned next to the pitch delivered by our OB trucks and the tracking data, delivered by our subsidiary Sportec Solutions. These sources allow us to create a new quality level of game audio coverage. This kind of cross innovation is the future of live sports broadcasting, bringing together video, audio, graphics and data to create the best experience for fans and viewers of the Bundesliga.”