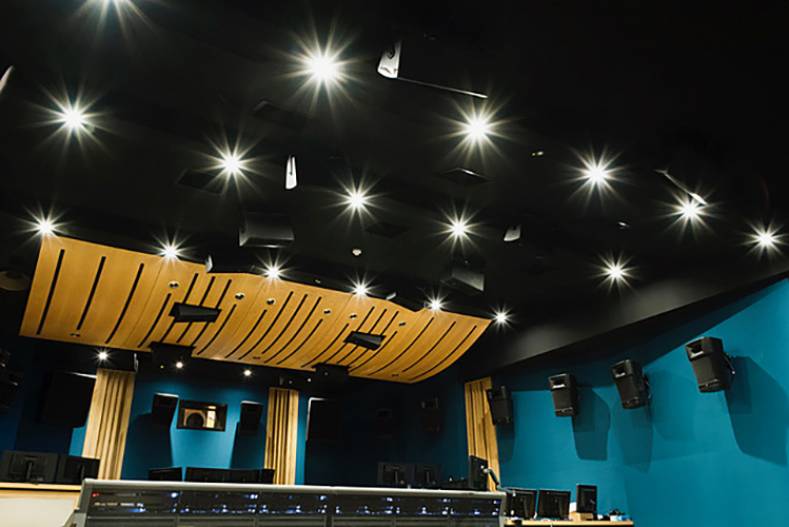 Halo, a major London TV and feature film post production studio, has finished a £300k upgrade of its main Studio 1 film dubbing stage, which it acquired at the end of 2011 after taking on the lease at 25 Noel Street in London’s Soho.

As one of only three cinema-scale audio mix rooms in central London, Halo converted the stage into a Dolby Atmos environment, based around 46 JBL loudspeakers. The speakers, along with the Crown DCi-N network amplifiers and BSS Soundweb DSP, were supplied by Sound Technology, who distribute these and other Harman brands in the UK and Ireland.

JBL’s 3732T loudspeaker is designed for use in both studio applications and commercial cinema screens. It uses technology found elsewhere in the JBL range, and so consequently the DNA of these designs is shared with a high percentage of speakers found in mainstream cinemas. Engineers can be confident that if a mix sounds right in halo Studio 1, then it should transfer well to cinema speakers in the real world.

Dolby advised on the system using various JBL 9300 Series Cinema Surrounds and JBL AC18 and AC28 overhead channels, along with JBL 4642A screen subs and 4645C surround subs. These same systems are found at cinema complexes.

Halo decided on the BSS BLU-806, with its configurable I/O, for a number of reasons, enabling them to switch effortlessly from Atmos configuration to 5.1, 7.1, IMAX or DTS:X. The Soundweb device can receive audio via AES and DANTE and route and condition the signal before passing it through to the amps on BLU link.

A Focusrite RedNet D64R provides the MADI-DANTE bridge and interfaces between the Dolby RMU and BSS BLU-806.

Since the upgrade of Studio 1, several major blockbusters have been mixed through the JBL Cinema System, including Ghost Stories, Darkest Hour and Paddington 2.