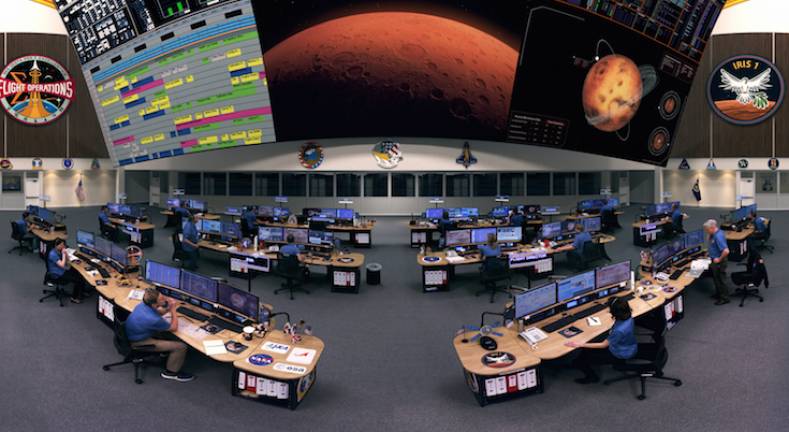 Custom Consoles’ technical furniture has made it to the big screen, well at least a 360-degree screen on the ceilings of planetariums around the world. The company’s EditOne desks are featured prominently in the mission control room set in Mirage3D’s new virtual reality 360 degrees and fulldome film called “Mars 1001.”

Robin Sip, founder and CEO of Mirage3D, who has produced the new film, said the Custom Consoles EditOne “has exactly the modern high-tech look we were seeking plus the practical advantage that it ships as an easily assembled flatpack. We purchased four desks and expanded this to 30 using our green-screen skills. We changed the actors and extras and props for every recording.”

Scheduled for release in June 2018, 'Mars 1001' centers on space reporter Miles O’Brien guiding viewers through a 1,000 day mission to fly a crew to Mars and return them safely to Earth. The production will be available in fulldome, flat screen and VR formats.

Mirage3D offers a wide range of chroma key effects at its green screen studio in The Hague. The Studio sets can occupy up to 15 x 15 meter floor area and faces a 4.8-meter high U-shaped green screen wall. Stage facilities include a 3-meter diameter turntable supporting weights of up to 1,250 kilograms, an overhead door large enough to accommodate a car, roller scaffolding, pulleys, and a wide range of props. The facility also has its own 8K cameras, edit suite, 3D animation system, video effects facilities, render farm and dome theater. The resultant recordings can be digitally superimposed into any conceivable background.

The Custom Consoles EditOne was developed for use in video editing suites and broadcast graphics areas.

The Custom Consoles EditOne was developed for use in video editing suites and broadcast graphics areas. It goes beyond traditional rectangular styling by using sculpted MDF support panels rather than metal legs. The curved theme is carried through to the desktop and a raised monitor shelf, both of which are optimized for a centrally seated operator. The EditOne desk incorporates three equipment pods with a collective nine units of rack space. These form the base of a monitor shelf.

Full cable management is provided, while power distribution is optional. An auxiliary equipment pedestal with an additional nine units of rack space and an integral worktop is also available.

Front and rear corners of the desk and auxiliary pedestal are curved, eliminating any possibility of collision with sharp protrusions and contributing to the ultra-modern appearance. The worktop and monitor base also have rugged and operator-friendly curved edges at front, sides and rear. Finish is in oak with contrasting black powder-coated MDF.

All furniture in the EditOne range can be shipped in compact flat-pack form for onsite assembly by customers or systems integrators, saving space, cost and delivery time.