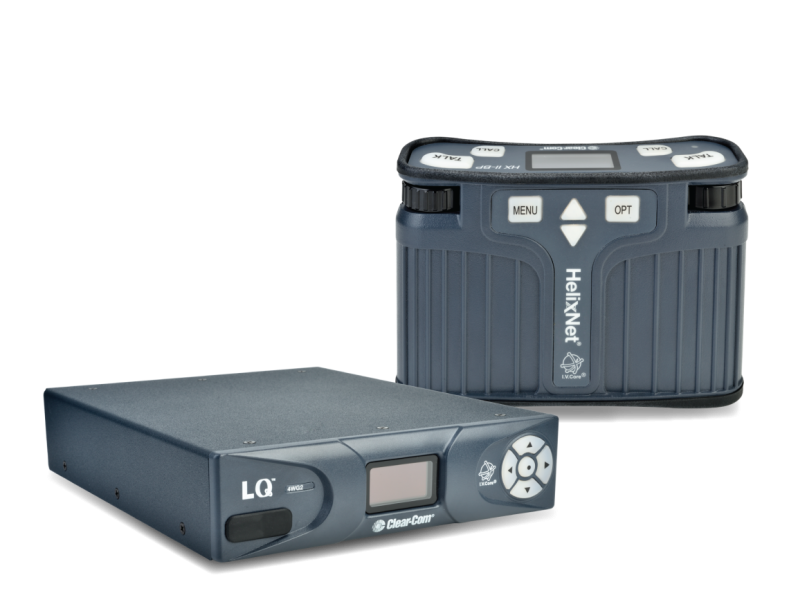 Clear-Com has introduced further enhancements for its intercom systems by adding new features to the HelixNet digital network party line. These include split-ear capability on belt packs, a higher number of input-output ports and connectivity to mobile apps and voice over IP (VoIP) devices.

As with its LQ Series of IP interfaces, Clear-Com the upgrades for HelixNet are more aimed towards the live production market and were announced at the recent LDI (Live Design International) Show in Las Vegas.

A notable addition to the HelixNet HXII-BP-X5 belt pack is the ability to split the feed to headphone or earpieces into two separate feeds. Clear-Com describes this as 'binaural' or split-ear operation, allowing the programme signal to be heard in one ear while the intercom output is heard in the other.

The number of I/O ports available to a HelixNet Mainstation has been increased to a total of 24 by connecting LQ interfaces using an Ethernet unit. These ports can then be designated to any of the 12 or 24 intercom channels within a HelixNet system. In this way the extra I/Os can interconnect with two-wire and/or four-wire comms devices or other audio equipment. In this way, says Clear-Com, it is possible to create a "higher density" digital party line installation. The audio connections can then be moved where required over IP LANs or WANs.

The LQ interface brings further IP capability by offering connections to the Agent-IC mobile app loaded on WiFi-connected iOS or Android devices and SIP (Session Initiation Protocol)-enabled VoIP phones. This is intended for situations where the main production intercom needs to be included to extra locations. In this way crew member are able to link into the central comms system using smart phones or VoIP units.