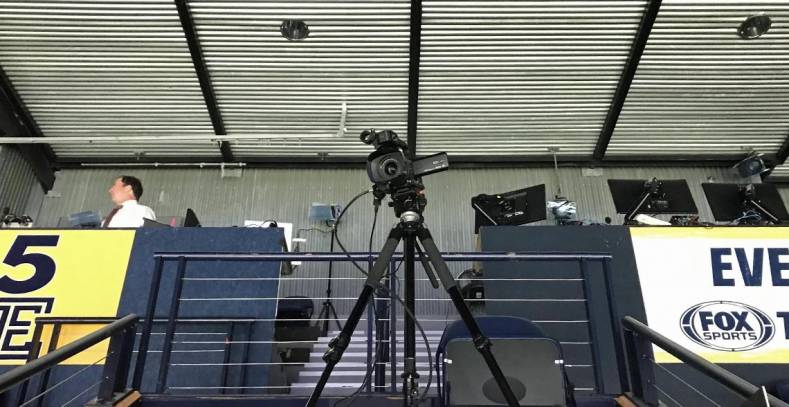 The Nashville Predators use the GY-HM200SP to produce video with a real-time score and clock overlay for coaches.

NHL’s Nashville Predators are using a new JVC GY-HM200SP 4KCAM sports production camcorder to record video of home games for coaches. Designed for single-camera sports coverage, the camera produces a real-time score overlay on recorded or streamed video output without the use of an external CG or production switcher.

The JVC GY-HM200SP camcorder connects wirelessly with the Sportzcast Scorebot4100 scoreboard interface unit, which was integrated with the scoreboard at the Bridgestone Arena in Nashville, Tenn. The setup automatically transfers score and clock data to the camcorder in real time, so the camcorder operator does not need to manually input the information.

Users can customize score overlays with team logos and custom characters, as well as position score overlays in various screen positions. The Predators include their team logo as well as the league’s logo in their graphics, which are placed in the upper left corner.

Lawrence Feloney, video coach, purchased the camcorder last fall and has been using it since the preseason. “I was blown away with it because of how simple it was,” he explained. “It integrates really nicely with our existing XOS Digital software.”

The camcorder is positioned with cameras from FOX Sports and other media outlets at center ice to provide coaches with a high, wide coverage of the game. Game footage is captured in real time in the control room using the camera’s HD-SDI output, but Feloney also records to the SDHC/SDXC media cards in the camcorder as a backup.

Feloney was also able to use the GY-HM200SP’s graphics during the team’s off-site rookie tournament. While there was no Scorebot integration, the cameraman connected the camcorder wirelessly to a tablet, which allowed him to manually input scoreboard information on the screen. “We were in another facility,” he said, “but we were still able to give our footage a professional look and a professional feel for our rookie tournament.”

The GY-HM200SP offers sport-specific scoring for football, basketball, baseball, soccer, and hockey. It can also store up to 50 full-screen .JPG or .PNG graphics in the camera, which allows users to create slideshows for use during extended breaks in the action. The camera also features a 1/2.3-inch BSI CMOS imager, integrated 12x zoom lens with optical image stabilizer, and 24x dynamic zoom in HD mode. It records footage in a variety of file formats, and its built-in HD streaming engine with Wi-Fi and 4G LTE connectivity provides live access to CDNs like JVC VIDEOCLOUD, Facebook Live, and YouTube.